More movies that should be more popular. Why they should be and why they’re not.  According to me.

Indiana Jones and The Temple of Doom 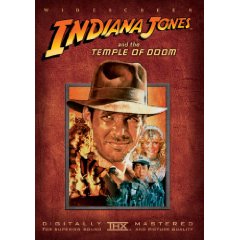 OK it’s not exactly a forgotten classic, but it is in my opinion the most overlooked, underestimated and rewatchable Indiana Jones movie.  From what I hear, both Spielberg and Lucas feel they got the atmosphere wrong. They made it too scary, then too childish. The tone is all over the place. It’s neither fish nor fowl, for children nor for adults.

The non-US release (on video/dvd at least -in Europe at least) had all the ‘horror’ parts cut out, so we don’t see any severed hand in a box or live-heart extractions to the same degree, etc.. With a result the movie comes across as a ridiculous cartoon with no tension. Children shouldn’t be frightened you see! This is Spielberg’s favoured cut of the film (when last I asked him) and I think he’s wrong. Dead wrong.

The US release however still has these scenes intact, which helps the more ridiculous moments to be seen as more like light-relief rather than movie-defining set pieces.

Spielberg and Lucas are remaking/ revisiting those 1950s Saturday matinee action B-class movie serials, so the Indy movies are meant to be hokey and silly and fun as we all know. But what the boys seem to have forgotten is these (original) movies were actually scary at times, once upon a time. They weren’t always only for children. Temple of Doom (uncut) to my mind has that mix of moods just right. It’s not a consistent tone, but I don’t want consistency. I want thrills and dumbness and action and room for the characters to breathe. This is the Indy for me.

The Man Who Wasn’t There 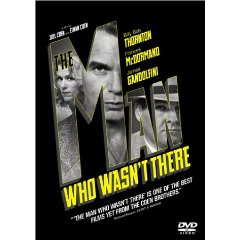 Never write off the Coens. That’s an adage I hold in high regard. To be honest I found this movie very dull and pointless the first time I saw it.The casting of well known actors particularly distracted me. They didn’t seem to fit in this black and white 50s period piece for the most part.

Still, it was going cheap a while later and I bought the DVD. It sat on my shelf for over a year unwatched and unloved. It might as well have not been there.

Then, one day I felt ready. I put it on and fell in love almost immediately with the rich black & white, the hilarious performances and with Billy Bob Thornton’s look, silence and screen presence.

Now I believe the casting of the often larger-than-life secondary characters is inspirational. Almost certainly I had been distracted by these characters and the overall series of events first time around, with a result I barely took note of the central performance, which I suppose is the whole point.

Still, we can’t appreciate a character’s ways or subtleties (or lack of them) until we better know who they are and how they will react to events. Billy Bob’s character in The Man Who Wasn’t There takes a little longer to get to know than most.

As with all the best films in my view, The Man Who Wasn’t There warrants a second look.  And many more. He’s there alright. You just have to keep looking. 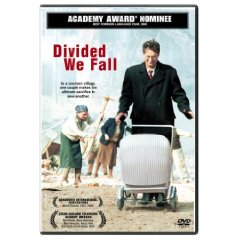 It’s easy to do nazis. Nobody can criticise a movie for being unfair to them. Nobody is going to rush up and say “actually it wasn’t quite like that…” because we all know they are the baddies and even if it wasn’t like that they deserve no better.

With the result, nazis have become a 2-dimensional dartboard. Any film that presents a multi-faceted dimension (such as for example, the excellent Downfall) is immediately criticised and attacked for making excuses for the actions. This is a dangerous airbrushing to my mind. How are we to recognise the faux-friendly, charismatic, populist, persuading face of such Powers if we’ve only ever seen the comic book Evil in all its height? What would we do if we suddenly opened our eyes to find ourselves in the middle of a world where fear invades every private thought and action?

Why did millions of people in many countries across Europe do nothing while the worst atrocities were being performed under their noses? Did they know? Did they want to know? Did they consciously mean to support the nazis in their ultimate aim? All of them?

Not many films broach the topic. It’s easier to show ‘Evil’ and atrocities and to point the finger and say “see how despicable this is!” and wait for the awards to flow in.

Divided We Fall looks like it might fall into this category, but it hasn’t been lauded and praised as highly as all the other “Holocaust movies” so it’s hard to muster the energy to watch it.

But this is an example of a great story being tarred with the brush of others. It’s actually not a holocaust movie at all. There are no concentration camps or easy tear-jerking scenes. It’s actually a very funny movie that understands the need for humour in the darkest of moments. Too many WWII tales miss this entirely -or lack the courage to show it.

Anyway the box/ poster above, I know, does nothing to sell the story. It doesn’t exactly make you want to see it, but I’m not sure what would… other than a persuasive recommendation. I hope this mini-mention persuades you to at least think about sourcing and viewing Divided We Fall. Don’t be put off. It’s funny. It’s frightening. It’s never exploitative or predictable. It’s a small film, but a lot more real and revealing and rewarding (and dare I say “enjoyable”?) than the big budget gut-wrenching, soul-sucking, hard-slog “retellings of the time” we all feel duty bound to sit through from time to time.

If you have have a chance to see it, see it. You won’t regret it. 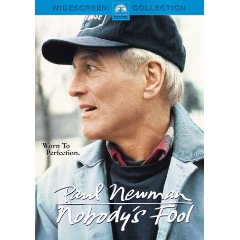 As with Divided We Fall above this film suffers from being hard to assess without actually seeing it. It could be a bit twee and melodramatic and most of us would rather not waste our time finding out. Life is too short and there are too many other films out there than to bother with something that looks like it might turn into a sopfest or something your mother would watch on a wet Sunday whilst waiting for Antiques Roadshow to come on.

This is the first film I watched (that I can think of) that made me want to read the book it is based on. Normally, if I haven’t already read the book, watching the movie is enough (for right or wrong). After Nobody’s Fool ended however, I felt like I hadn’t spent enough time with these characters. I wanted more.

Then I read the book by Richard Russo and I’m happy to report it too is great (even better of course!) and well worth reading. There are marvellous plots and subplots and characters in the book that had to be omitted if the film was to be made at all. That’s understandable -and the cuts are so well made for the film it’s not easy to see where more layers can or should fit if you haven’t read the book first.

After I finished reading the book I still felt I hadn’t spent enough time with these people, which started me checking out Richard Russo’s  other books. All to date have been great, but Nobody’s Fool still has a special appeal to me.

Paul Newman has rarely, if ever, been better in my opinion. And I include The Verdict in that.

Brotherhood of the Wolf 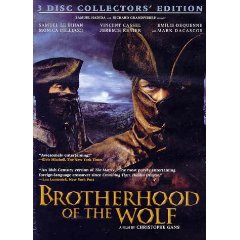 I don’t seem to like most blockbuster action movies. I think it’s because they’re mostly dishonest, over-manipulative, formulaic, over-serious, over-bloated, childish wastes of celluloid (or RAM), featuring a one-man-goody-two-shoes who is actually a “somehow moral” psycho, killing only other psychos -so it’s all alright. None of which can be said of Brotherhood of the Wolf.

Nobody is “the good guy”. Well not really. Which, to my mind makes the long list of psycho fighters a lot of unadulterated fun, bereft of the emotional baggage your average Hollywood blockbuster would have us believe we must have.

If you do see it, make sure you’re watching the director’s cut. It goes on forever and it’s a ride you won’t forget too soon.

What is it? …Well, for starters it’s French language (Canadian). Set in 18th century France, where everybody fights in a Kung Fu style. For no apparent reason that’s the fighting method of choice. They’re all at it. Including the women. And what women! It’s maad I tell you. Monica Bellucci melts the screen with her sizzling charms (no, she doesn’t fight to my recollection) and never looked better. That’s saying something. Her husband is in it too. That’s saying nothing.

Apart from not featuring a cleaner-than-thou pure-Good psycho for underage children to look up to, I believe the other reason this film was not a success is the rather-special special effects. It’s some time into the movie before we get to see “the beast” that has been terrorising the countryside. When we do our collective hearts drop because it’s so bad it belongs in something like Scooby Doo.

Although this does take us out of the movie, it’s not really about the beast himself, so for me it’s a forgiveable problem.The ultimate “explanation” is (or would be) a lot more realistic than this ridiculous computer model would have us believe though, so hang in there!

Obviously budget and CGI-ability at the time (2002) played a big part in its sub-parness. I reckon a revised director’s cut is called for, with a new digital beast using today’s technology. It should cost a lot less now too.

I doubt that will come at this stage, though. 🙁

Anyway, the movie rips along and you never know where it’s going to take you or how it will be resolved (if it is to be resolved!) Neither does it kowtow to PC-sensibilities. In fact, if there’s something you hold dear your sensibilities will almost certainly be stomped on one way or another by the end of this film.

Other than the cheap-looking CGI, the rest of the film doesn’t look or feel too low-budget. In every other way it’s a large canvas, bodice-ripping action adventure for adults who can appreciate a story that is not on rails.

It’s a movie like none other -17th century French Kung Fu, with nary an Asian person in sight to at least pretend it makes any sense. Yet it is based on actual events. With added kung fu, naturally.

Watch at your peril. It’s a great movie if you’ve found yourself tiring of the standard formula, but you have been warned.

…Now I really feel like watching this again after all that. I hope you do too!