I’m the worst person in the world to ask if you’re wondering what movie to watch because it seems my DVD shelves are full of films that nobody else likes (well, not enough others anyway). In this series I hope to list some of my personal favourite movies that I think are over-looked or underrated or at least not praised highly enough by all the world and its lobster. You are free to disagree by all means (I hope you let me know), but at least I’d like to take this chance to explain why I like them and/or why I believe they are not as popular as they should be.

(I’m not against “popular” by any means -I just think these movies should be [more] popular too -and maybe would be if only everyone looked at them as I do!)

So in no order other than the order in which they come to mind, we begin… 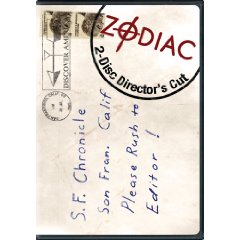 Also, while I’m at it, I’d like to add the movie it most reminds me of (apart from All The President’s Men)… 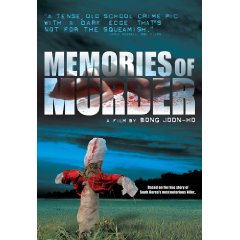 Which is probably why they weren’t smashing successes (to my knowledge). They both concentrate less on the murders and the blood, etc. than on the people who seem to spend their lives becoming increasingly obsessed by the events. These movies could be about stamp collectors and little need be changed -except of course we (the audience) would find it harder to understand the obsession that drives the person in question.

Serial killers deserve none of the attention mass culture awards them, but in concentrating on the individuals who are obsessed with these specific murderers, Zodiac and Memories of Murder are more to do with turning the camera on the audience itself -can you not see how crazy this thing is making you? It’s tearing you apart, but you keep searching and delving and looking for answers and it is eating you apart from the inside out.

These movies are you, pop culture, which is why you choose not to look. Snap out of it and look hard and recognise yourself before it’s too late! 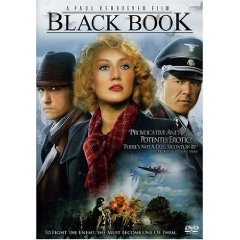 More fun than war should be, of course, which is why it pretends to be oh-so-harrowingly-true for a while before admitting “ah to hell with it, have a look at Carice van Houten colouring her bazz instead!” by the mid-way point.
(funny aside, I just went to imdb to search for the actress’s name and typed in “Black Bush” by mistake. Ha ha! ..Sorry I know that’s one of the parts we’re supposed to take seriously, whilst secretly snatching a quick leery peek. <ahem> …What? You did take it seriously? ..yes, well, er, quite.)

Anyway, where was I?

Ah yes, it’s silly. It’s crass. It’s holier-than-thou in parts in case you think you can criticise it. It almost makes no sense.

If Verehoven had made it in english (if he hadn’t driven himself out of Hollywood after the disastrous Showgirls) it would certainly have made as much money as some of his other movies like Robocop, Starship Troopers, Basic Instinct, etc.

Life and Death of Peter Sellers 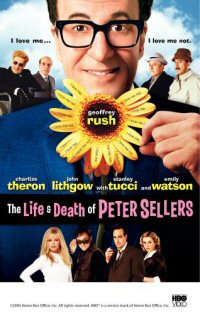 I think there’s something beautifully sad about Peter Sellers -in a funny way. This movie captures that vulnerable, selfish, spoilt and loveable little boy perfectly. It’s less a biography of Sellers as it is a movie made in his way, as he might have liked to play it, even though it’s not exactly very complimentary.

Again, this is a film you could watch over and over (great commentary on the dvd too) and still get new things from it. I’ve heard Britt Eckland complain she wasn’t consulted, but really it’s not about Britt Eckland or anyone else other than Sellers …or a narrow self-centred look at Sellers possibly from Sellers’ point of view. It’s less about the facts than about how we perceive Sellers may have perceived those facts. Or something.

It’s quite weird the way it’s made, but fascinating watching Geoffry Rush play Sellers play so many other characters throughout the movie when we least expect it. What’s that you say? Stanley Kubrick never behaved in that way? Who cares!? It’s not about Kubrick -it’s about Sellers’ warped view of Kubrick. Or our view of Sellers’ view of Kubrick. Repeat for everyone and everything else. Also features the funniest “plop” in movie history.

The scene where he’s standing outside in the snow towards the end is particularly touching. The only bad thing I can say is it’s a pity Rush was a little too old to play the part (even with the digital touch-ups in some parts). In every way within his control however he was excellent. 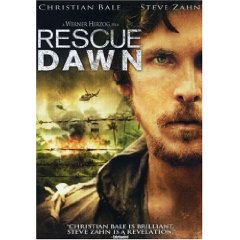 I was surprised at how “commercial” this film is. If the exact same film was made by anyone other than Werner Herzog it would’ve been a lot more popular I’m sure.

Instead Herzog’s fans seem to shun it for being a sellout and not many mainstream crowds seemed to want to dip their toes in what could possibly involve viewer discomfort for two hours. Instead of torturing the audience (as he does only sometimes to be fair) Herzog instead seems content in torturing Christian Bale.

…This is unfair of me I know.  I’m sorry Werner. I saw the opportunity and ran with it.

The beauty of this film is that it doesn’t revel in the torture and dehumanisation of the prisoners-of-war as so many other movies would have done. Yes it shows how awful it is to exist under such conditions, but only just enough to establish it’s a bad place and these people need to get out before it’s too late.

The trials Bale’s character (based on a true story) goes through in order to escape is the stuff of videogames (if this movie was more a part of pop culture that is), although I wonder what Mr. Herzog would think of such a notion. ?

Not a sellout. Not an arthouse. Good, straightforward, honest, decent movie. 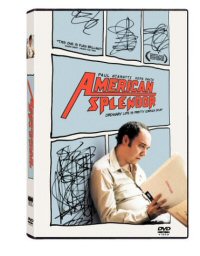 Very adventurous movie. It breaks a lot of rules, but never without good reason. It’s not “look at me I’m a director”, but it’s all about the character and how he sees life and what that means. Harvey Pekar plays Harvey Pekar in the mostly-documentary-section of the movie, except for the parts where Paul Giamatti plays Harvey Pekar, where it’s more movie-like.  Or something.  More or less.

Harvey, you see, has spent a large part of his life writing a warts-an’-all comic book about his life, you see. So the movie has Harvey describing (and interacting with) the Harvey he has written about for so long. It’s the same Harvey, but as seen in many ways.

I just realised this film has somewhat-thematic similarities to The Life and Death of Peter Sellers, in that they’re about particular individuals and how they see the world -or how we imagine they maybe see the world- through somewhat-extroverted-introverted eyes. I should watch both back-to-back sometime to spot how they go together and/or differ. 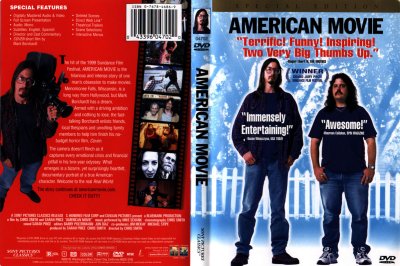 The funniest documentary ever. One of the very few I can watch over & over and still enjoy.

When I first saw it I had no idea if it was real or performed by actors. Now I’m fairly sure it’s real, but either way it’s funny as hell -and touching. You find yourself laughing at the characters one minute, then feeling bad that you found perhaps the wrong thing funny, then laughing with them, then admiring the perseverence to make a movie, then wishing they would stop, then hoping the end result doesn’t turn out to be totally disastrous, then realising it’s a damn fine achievement to do what they’ve done no matter what you think of those involved, one way or the other.

The director of American Movie, Chris Smith, did an excellent job in capturing every human emotion in all its subtleties (and not-so-subtleties). 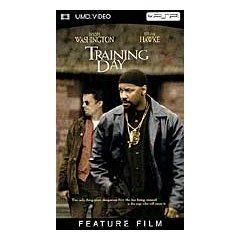 Yes Denzil Washington won a best actor award for it at the Oscars, but this non-formulaic cop movie is still under appreciated in my opinion.

I’d like to say all Denzil Washington movies are under appreciated, but I can’t because most of them are putrid (he should stop working with Tony Scott ASAP). I don’t know if it’s the scripts he accepts or if he’s just not offered the right roles, but he’s one of the few charismatic actors working in ‘Hollywood’ today. Training Day is his best work in my opinion. Ethan Hawke isn’t even annoying in it. Any movie that can make a boast like that is worth watching in itself.

Treasure of the Sierra Madre 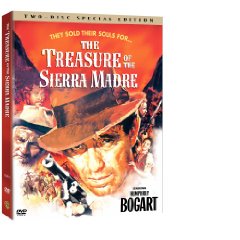 I know -it’s the obligatory “old movie” of the list, but I promise it’s more than that. I know this is a very well known movie, but it’s dropped off the radar somewhat. People assume they have seen it -or are not really that interested in finding out for sure (“because it’s all in that black & white isn’t it?”) and “if you’ve seen one Humphrey Bogart movie you’ve seen them all, right?”

Wrong. I do like a few others, but here Bogart is not playing Bogart. His character is deeply flawed from the start. He means well in his own way though.

Believe me, it’s not at all dated. If this film was shot today, reel-for-reel, it would be viewed as a breakthrough action movie. It has real characters with real faults working through a plot that is never predictable.

Not many women around though.
…I just realised most of the movies I’ve mentioned to date have a lack of women or “female interest”. I’ll have to rectify that right away with… 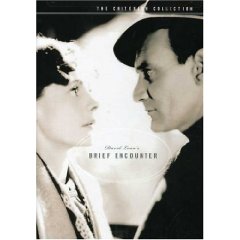 OK I’ll come clean: Yes it’s more than 50 years old. Yes it’s in black and white. Yes it’s a teensy bit melodramatic, BUT I bet if you don’t love it you haven’t seen it!

People hear of it, then quickly shrug it off lest the very notion invokes a bad case of the merry-old-englands and the good-show-wots. And obviously it’s full of “frightfully” quaint and polite Mills & Boon romance.

Well in a way, it is, but damn it’s a ripping film. She’s married with children you see. He’s a doctor you see. They meet and fall in love but they don’t want to you see.  It’s dashed unpleasant for both of them, but what can they do?

What do they do? The movie is worth watching and watching and watching. The ending is always worth it as Racmaninov’s Piano Concerto Number 2 swells to its amazing crescendo. (I didn’t know what it was before seeing this film, but there are a few things you remember for always after watching Brief Encounter. The music is one of them.)

Don’t be put off. Only a real tough guy can watch a film like Brief Encounter without worrying about his manhood. If it teaches you nothing else it’ll demonstrate how else to use a kleenex.

(and no, it’s not a big sad gushing ending -just all-powerful)