Y’know when you are walking down the street and pass an old one-armed one-eyed chinaman in traditional garb, smoking from a long pipe who nods his head and walks away down a dodgy-looking backalley and you wonder if you should follow him for some big secret revelation beyond your imagination or turn and run in the opposite direction asap?

Well discovering Ivory Tower Restaurant, in Cork, Ireland, for the first time is a little like that.

The outside is somewhat… unassuming, to put it mildly, downright frightening to more accurately describe it. 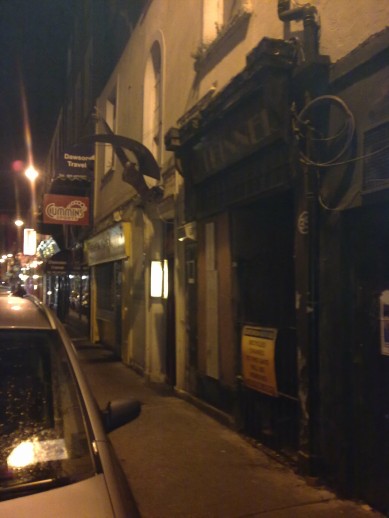 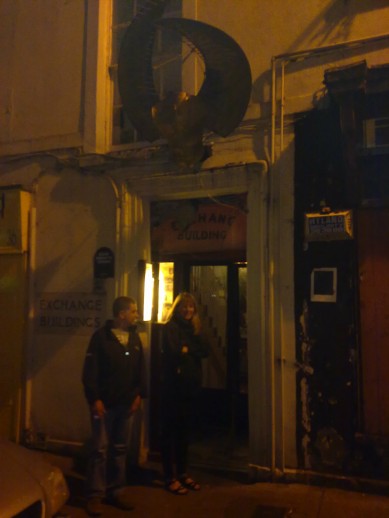 This is as good as it gets outside. See that golden angel thingy overhead? It looks dangerously perched over the doorway. It feels like walking under a (spiky) ladder passing through the doorway and the bad-luck feeling stays with you as you proceed. 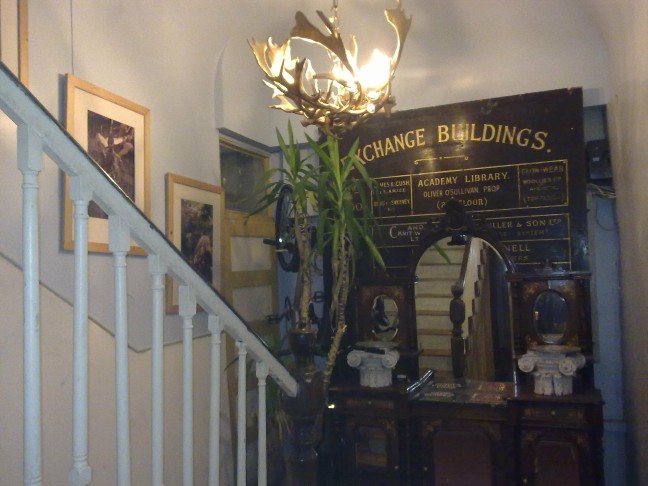 Truth be told, I love the ramshackle style. It’s like old New Orleans or a mishmash of clutter that Major Johnny Brit might have brought back from his trip round the world “to see the Empire an’ all that”.

Up the stairs and through the door on the right and you’re into the main room (no further photos I’m sorry to say -the rest you’ll have to see for yourself!)

If you had doubts up to now, they may be brushed aside when you catch a glimpse of the menu (sample here), but all misgivings are definitely tossed out the [large] window [overlooking the street below] once the food arrives.

Three of us called there last night. As a ‘surprise taster’, we each got the same small, meaty Octopus salad.

Two of us lashed it down.I can only remember tasting octopus once before, and I didn’t like it -it was rubbery and it had tentacle suckers. The cuts in this salad though were soft and meaty and very tasty. Mrs. Rumm couldn’t eat hers (don’t worry -everything else was self-selectable), but I dare say if the owner, Seamus, had called it ‘chicken surprise’ instead she’d have loved it. 🙂

I had a ‘wood-pigeon with beetroot’ starter. I’ve never been a big fan of beetroot, but again, here the beetroot tasted like meat -it was thickly cut and melted in the mouth like a moist tender slice of beef. In fact at times it was difficult to determine which was the beetroot and which the poor, dear, dead and tasty wood-pigeon. Dear dear wood-pigeon. I loved your meat, though we never met.

My brother had a sushi starter, consisting of crab wraps, sea bass and one or two other bits. My wife had the duck (could well have been the main course in another establishment, if served with a few dollops of potato). It had a lovely-looking crispy skin that I was tempted to grab from her plate when I saw her slice it away to reveal the tender meat within, but by then I was lost in the delights of my own dish.

Next, for the “between courses” course, we had a choice of three dishes. The two males chose the lobster bisque, Mrs. Rumm again took the non-marine route and went with the sorbet.

I had expected a little shot-glass fishy aperitif. Instead I was presented with a bowl of soup (with newly-replenished bowl of delicious bread). I have no doubt the lobster was running around that morning because the bisque had quite the kick. In truth, this was the closest I came to disliking anything: The dish was peppery and tangy and ‘alien’ tasting. Somehow, after dipping a slice of (raspberry) bread into it however, it began to transform: The bread I could understand, and now the alien taste blended well with this understandable taste and so I found my taste buds accepting it. By the end, do I need to make clear? -each of our ‘late course starter’ dishes was completely demolished.

Onward and ever-upward to the main course!

I had the Sea Bass. Nothing amazing in the description, but the taste was delicious I’m sure I don’t need to say. It was served in a sauce similar to the lobster bisque I had just eaten, but without the extra kick that would’ve knocked the bass out of the plate. Instead, this sauce had an ‘added lightness’ feel to it, much the same way lemongrass does for asian cooking (if that makes sense?)

My brother had the duck (very tasty looking too) and Mrs. Rumm had the undeniable steak.

For dessert, two of us had the Selection of Irish Cheeses (“Served in a right state”) and the other had the berry tart with olive oil ice cream.

Let me say, for the record, I haven’t tasted every Irish cheese by a long-shot, but I can admit that I’d never had a ‘delicious’ Irish cheese before. In Ivory Towers, however, I loved all of the 5 or 6 cheeses on my plate. Maybe it was the mix, maybe it was the salty crackers or the rich Rioja red wine, but I particularly liked the blue (Bellingham) cheese and the nutty/seedy one -‘Killeens’ I think Seamus told me it was. Each available from On The Pigs Back in the nearby English Market.

Overall, the evening was an adventure as much as a meal. I had been there a number of years ago and can vouch for the consistency and quality of the food.

The total cost wasn’t cheap, but well worth it.

One bonus was when we discovered that the set-price menu had been reduced from 60euros to just 50, which is a steal for food of this quality. To celebrate we had a little more wine than we may have had, which went down very well, but did cause costs to leap of course. 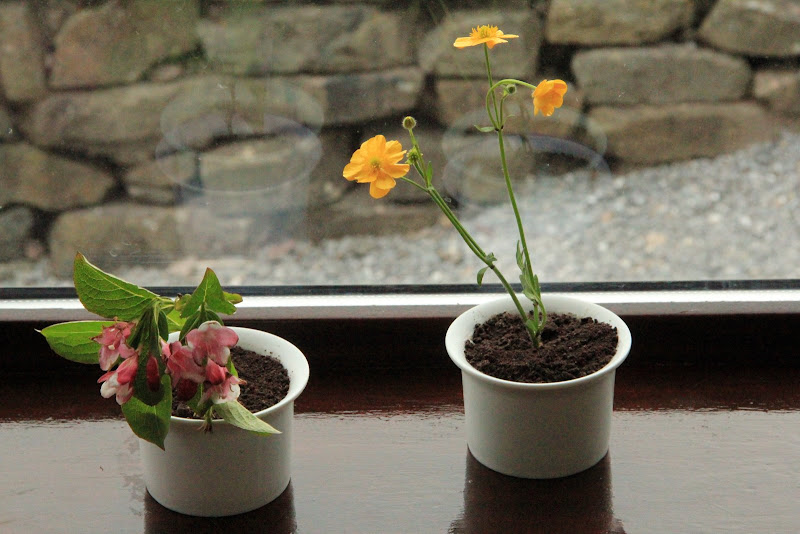 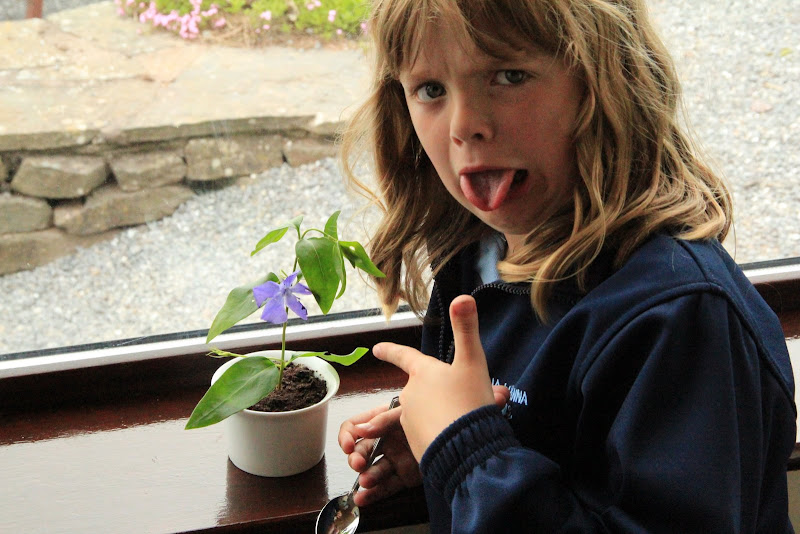 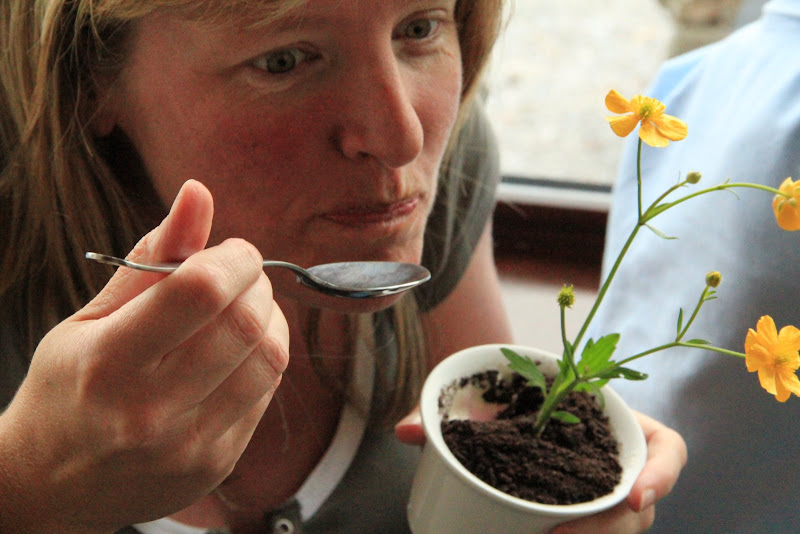 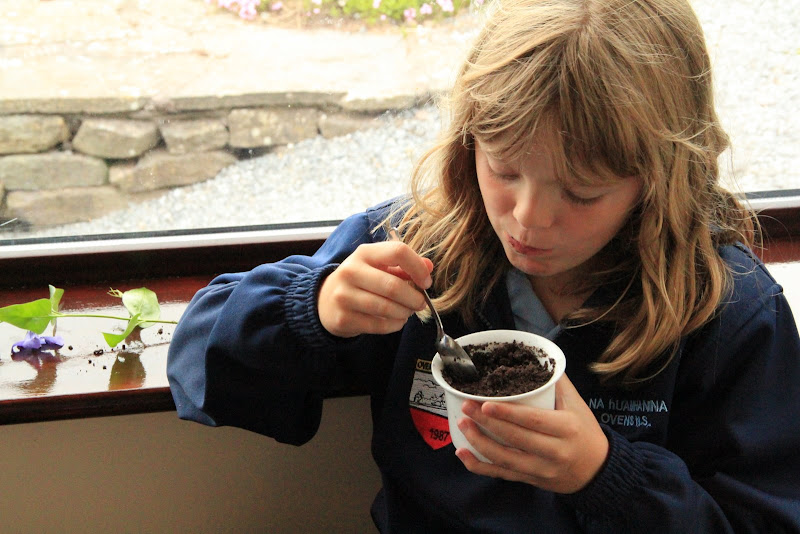 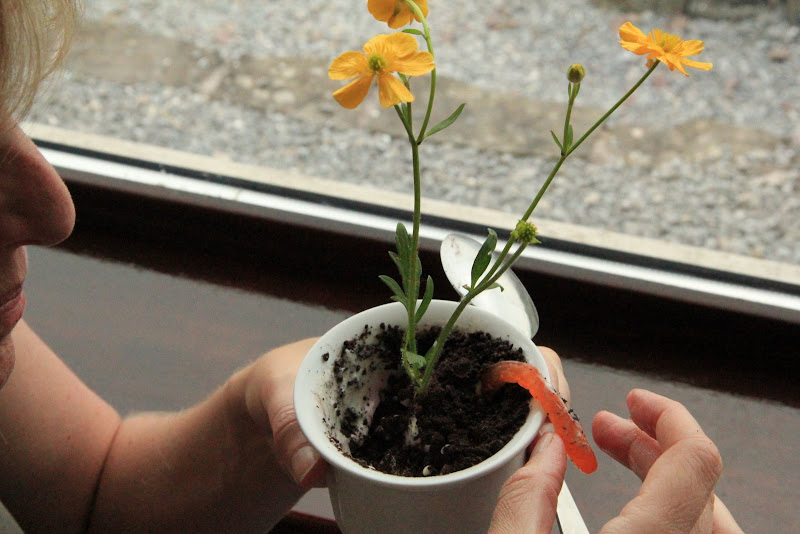 I like to think I’m a fairly fair equal-rights kinda guy. I tidy things around the house, make dinners, put away the dishes, etc., wash the odd pot, go shopping, look after the kids -homework, play, etc.. I’m a bit of a house-all-rounder you could say, but I have to admit Mrs. Rumm is better at some of the above than yours truly. And I have to admit I don’t mind at all to admit that.

I realise it’s not OK to admit that and leave it at that in this day and age, but we all have our talents and specific likes, dislikes and phobias. No matter what I do, at times Mrs. Rumm will undo and redo it to her liking. Best of luck to her I say. As I said, I’m an equal rights kinda guy. I’d never stand in her way in having something done precisely as she feels is needed. It’s true that she does some things best -by best I mean, to a degree where we can both be satisfied.

Similarly, I’m the go-to guy when the grass needs cutting, lightbulbs changing, TV & electronics setups, computers, DIY (to a degree), etc.. I don’t think Mrs. Rumm has ever attempted to put up a shelf in all our years together. But I’m not bitter. As I say, I’m an equal rights kinda guy, but I’m nothing if not fair. She has no interest in these things and it’s not worth the hassle overseeing her trying to cut the hedge anyway.

Nobody set the rules to these unwritten tasks or who has to do them. Or to what degree. They might not suit everybody in the house at all times, but on the whole, there is something of an understanding when it comes to who-does-what. More or less.

But for the life of me, there is one item in the house I cannot fathom:

The thing makes no sense believe me!

Mrs. Rumm sometimes leaves little instruction notes for me if she puts something in but has no time to wait before going out. The notes look something like this:

It seems one has to return to this device every few minutes to set it to the next task. Are ALL washing machines like this?? How is one expected to know such things?? Even looking at the above note (which she left for me this morning) I had to ring her for a decryption key. Were the numbers associated with the length of time on each setting? It appears not -they’re the numbers on the dial on the machine.

I was busy at that precise time I was speaking with her, so I said I’d do it in a while. Of course despite my best intentions, this minute lasted a while longer. But eventually I remembered and set it to Rinse -number 10 setting. Mrs. Rumm had added this would take 10 – 15 minutes.

So off I went and got busy elsewhere.

Another few hours elapsed before I remembered and had time to do step 2: Drain 13…

But all’s I know is if more men used washing machines more of the time (I know -many do) then this kind of come-back-to-the-font-time-and-again nonsense wouldn’t wash for very long.

Can you think of any tasks best suited to women -or men? Or any tasks traditionally done by men that women would do better? And vice versa.

I realise I’ll be sneered at and worse for even rincing this topic, but thought it worth spinning round to see what drains.

I’ve been thinking of cups. Well someone has to.

For the purpose of this discussion (and I hope you jump in) I will keep it down to just two types of cup: Those that are attractive to The Male and to The Female.