This is possibly my favourite song from our forthcoming album. The album will be called Marvellous Day and will be available… soon.

There is something self-defeatist about movies that purport to be anti-war spending 90 minutes bathing in blood and comradeship. Violence is its own advertisement. Showing more of it in order to lessen it is akin to invading a country in the name of peace.

Furthermore, like a closet-gay spending an inordinate amount of time ranting against homosexuality, the very people who get their knickers in a twist over onscreen orgiastic blood-letting are often the ones most titillated by it. How else can Gibson’s Passion of the Christ be explained? Extreme violence turned up to a sadistic-11 in the name of all that is holy and righteous.

The truth is Violence and Aggression and Anger and Death are cool. Singing and Romance are not. I say that with a contemptuous sneer, not as a justification for what is considered cool.

Singing & Romance (together) are allowable nowadays only if accompanied by a nod & a wink that advertise how you recognise the inherent uncoolness of it all, but that you are so cool you just don’t care, which makes it acceptable and perversely cool.

But before ironic cool uncoolness there was unapologetic joy and love and beauty and raw emotion without the baggage of the pre-packed Happy Meal mode in which to consume it.

You can fight and complain about what is considered cool -and make a good case as to why it should not be so considered, but the more you do the cooler it gets and the further into Crater of Uncool you dig.

Enter The Umbrellas of Cherbourg. 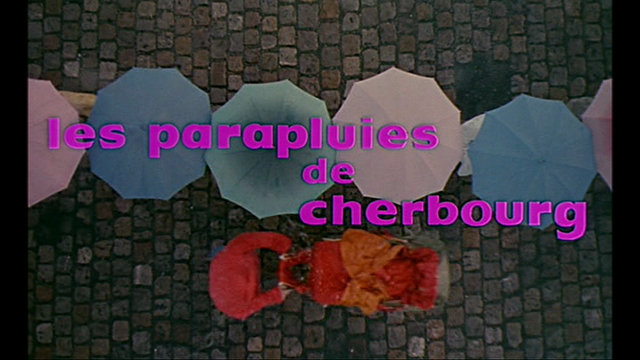 END_OF_DOCUMENT_TOKEN_TO_BE_REPLACED

Our latest video is up and running…

We “completed” this song some time ago, but only recently made the video. Possible contender for our forthcoming album?

Personally, I always found it a bit too “word heavy”, but it has definitely grown on me and have received quite a bit of positive feedback. (thanks)

As usual, music and vocals by John Poland, lyrics by Stanley Rumm.

It’s been a while since I posted a song by John Poland (ok and me too on lyrics, etc.).
Here’s our latest “finished” one. Nothing really funny here this time I’m afraid, but I quite like it anyway. 🙂

I say “finished” because we have many more “almost finished”, but not completely so. We have a lot of songs in total and have had to stop starting new ones because we weren’t getting around to completing any. Now we’ve resolved to root-out a decent “album number of songs” that suit each other and get them into one collection ASAP.

My first reaction was how come all these camel/llama type animals look like famous singers?

Have a look for yourself…

(One mustn’t laugh. Whitney was going through a rough patch at the time)

Have you seen any singing alpacas recently?

D’OH! Imagine going through the pain of (assisting in) the birth of a song, making a video and all that’s involved in that, then forget to mention it.

Well I just remembered to mention it. Here it is.

How to do anything:

I went for a pleasant walk in the woods with Mrs. Rumm a few weeks back. During such excursions I like to travel off-path whenever possible …especially when someone with me hasn’t done so before. I find one discovers much more on the road less travelled, don’t you think? Or, if not more, at least different.

The only problem I find with this is in re-joining the main path. If another person witnesses this return their dirty silent judgemental mind throws a wobbly: “They’ve been having it off! Why else would they have gone into the trees!?”

Fear not, though, for before we go any further I shall reveal to you the secret to rejoining the path.

As I told Mrs. Rumm that day, “if anyone sees us as we come back to the path they’ll be searching for signs of a lustful romp” (honestly, we weren’t at it, but it’s OK if you choose to believe otherwise). “Anything we say or do will be assembled together in their minds in such a way as to ‘prove’ this snap assessment.
“So, as we return, if we meet anyone else just say Guten tag, then walk on.”

Well we didn’t meet anyone on that day, but I mention it because it happened on the same day as…

END_OF_DOCUMENT_TOKEN_TO_BE_REPLACED

Three months in the making, this video is our most ambitious to date -until the next one!
(coming soon)

If this song + video doesn’t add to your day’s cheer I fear you’re beyond hope.

OK, obviously we weren’t filming continuously for three months, but we started it in April and finished it in June. It’s been a long time coming, but now that it’s here I’m very happy with it. I trust you are too -OR YOUR MONEY BACK!

…And just for the record, yes marvellous is spelt with two Ls in the US.

I’ve heard good things about the movie Two Lovers -at least enough to make me think I might like to see it. I’m sure it is a good movie, but I won’t be going to see it.

I generally go to the cinema alone. I prefer it that way, but anyway my wife has little interest in movies even if we did get time off together.
So the thought of walking up to the ticket office alone and saying “Two Lovers please” is just too much. I could buy online and collect at the door, but I despise the idea of extra charges for such things -THEY’RE SAVING MONEY BY HAVING NOBODY THERE why should we pay more??

Another film I felt awkward buying a ticket for was “Michael Clayton”. Thankfully I hadn’t realised how awkward it was to say it until I was standing there with cash in hand saying it. It just felt wrong somehow. Not entirely sure why with that one.

Are movies with people’s names harder to say at the ticket desk?

I recall having a similar dilemma paying for Amelie. I think that might have a longer name in some countries (?) but around here it’s just called Amelie. The problem for me there though was the young couple who paid before me asked for two tickets to “Ay-muh-lee-uh”.

Even though I knew it to be wrong I had a sudden burst of …FEAR, is the only word I can think of, that I was about to say it wrong.
It induced a kind of mental stutter that heard me purchasing “One for the same please”.

Have you ever felt awkward saying something or someone’s name?

[By the way, this post was first made (by me)  in a reply to a Jett Loe post in The Film Talk]