Terry Gilliam’s BRAZIL might divide the opinion of viewers, but just why is it called BRAZIL? 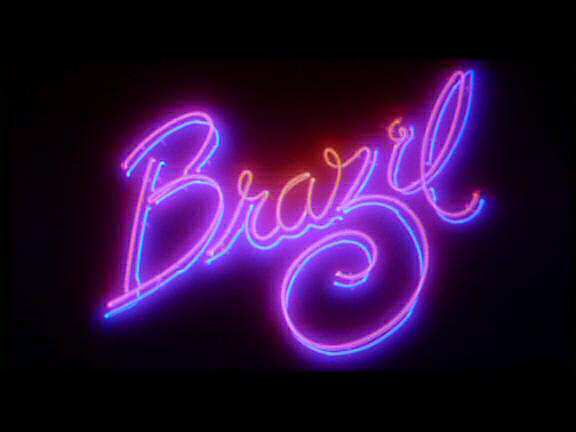 Have you ever felt alienated from everyone around you? Ever felt like ‘the system’ just does not cater for your own personal growth and developmental needs?

To me at least, this is the theme of Terry Gilliam’s Brazil. It’s a longing -not for any one particular thing, but instead just a dreamy longing –a non-specific belief that somewhere, somehow, in some ways life is not like this.

The theme song itself is one of those wispy, dreamy tunes that sticks in the mind of an individual who is already lost in a world where everything and everyone else is seemingly struggling hard to move in a direction that appears to be meaningless.

For the benefit of those who don’t know the tune in question, it’s actually entitled (according to imdb.com) “Aquarela do Brasil” by Ary Barroso and it goes like this…

(* Ok there are other words to it, but for the purpose of this ‘proposal’ we’ll stick with la las.)

This is a transportation tune for the mind and I defy anyone not to be carried away, at least for an instant, to another ephemeral realm where tweety birds hum this daydream theme all day long.

In the book The Battle of Brazil, Gilliam tells us as much himself when he explains his inspiration for the title:

“Port Talbot [in Wales] is a steel town, where everything is covered with gray iron ore dust. Even the beach is completely littered with dust, its just black. The sun was setting, and it was quite beautiful. The contrast was extraordinary, I had this image of a guy sitting there on this dingy beach with a portable radio, tuning in these strange Latin escapist songs like ‘Brazil’. The music transported him somehow and made his world less gray.”

…So there you have it. From the horse’s mouth. Case proven. It’s all about the song Brazil, not the country. Let’s go home.

.The original motion picture soundtrack was composed and arranged by Michael Kamen, who worked closely with Terry Gilliam on the score.

.For anyone, like myself, who bought this soundtrack it will not come as any surprise to point out that the main chorus tune itself (above) does not actually feature in any significant manner, apart from in the final track -“Bachianos Brazil Samba.”

.Each of the other tracks is a build-up of one sort or another to this anthemic chorus. Each one sucks you in and pulls you effortlessly along towards the distant, dreamy shores of the land known as… Bra-zil, Lala la lala la la laaaaaaaa. But just as the listener is about to burst forth into this land, the song ends. Each and every time we are abruptly snapped away from this joyous outburst by a deafening silence that marks our return to the drab and mundane existence that envelopes our own daily lives. 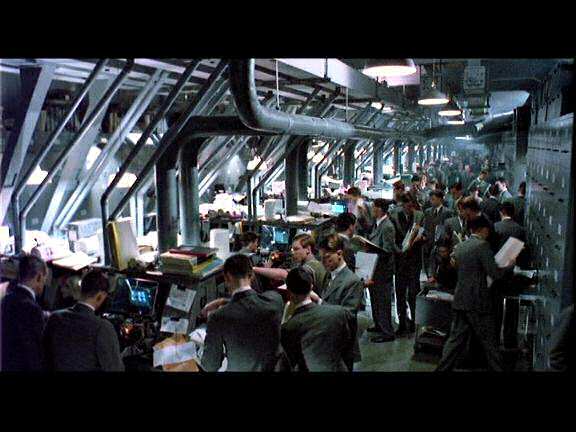 The first time we have a build-up in the song is during this scene. In fact the whole scene is one long build-up to what should be a burst-forth of the main chorus, but (as happens again & again), it comes to an abrupt end.

And yet we find ourselves dreaming now more than ever of a land –of a place –of an existence known only as… Bra-zil, Lala la lala la la laaaaaaaa…

There are a few tracks that feature far-off, echoey renditions of this refrain, but nothing that permits the listener to meaningfully grab a hold of and fly away with. 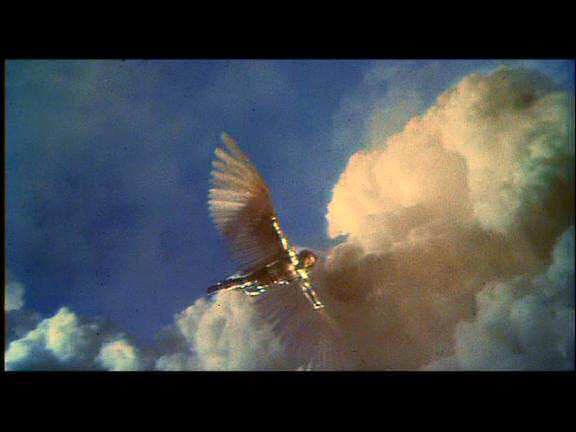 .Only during the dream-sequences is the music (and character) free to explore the central (musical) theme -albeit in a far-off dreamy kind of way. Again, this continuously comes to an abrupt end as Sam & the viewer are dragged kicking & screaming back into “reality.”

Just past the half-way mark on the soundtrack we are permitted a nice conga rendition of the main song (entitled “Brazil-Geoff Muldaur”) which does indeed feature the full tune -well, most of it anyway. This is a nice reward to the viewer/listener for making it this far and a promise of more to come, but still suggests a system-structured serving that is not quite the unadulterated abandonment we are subconsciously expecting. Here there are rules (conga rules) and structures to conform to. 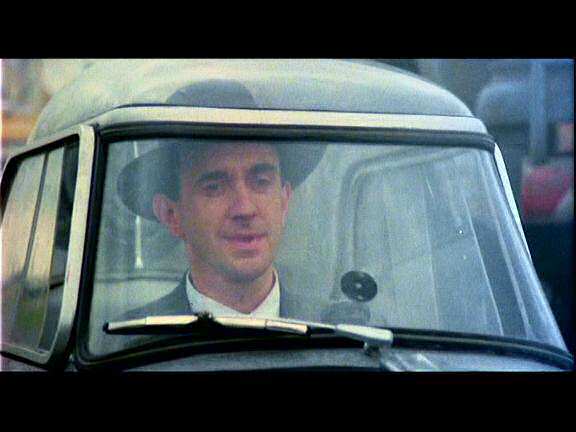 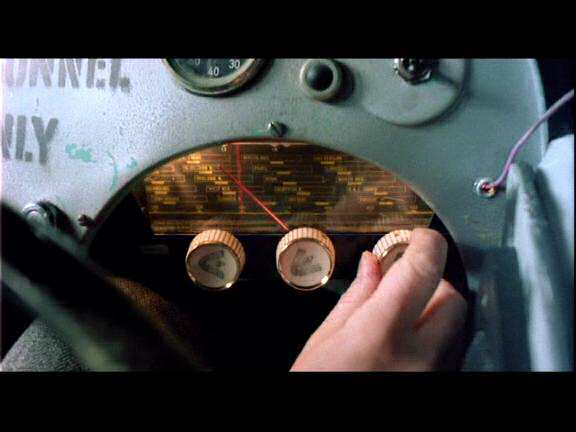 This too is briefly interrupted with news of ‘terrorism’, until Sam retunes to his daydream. 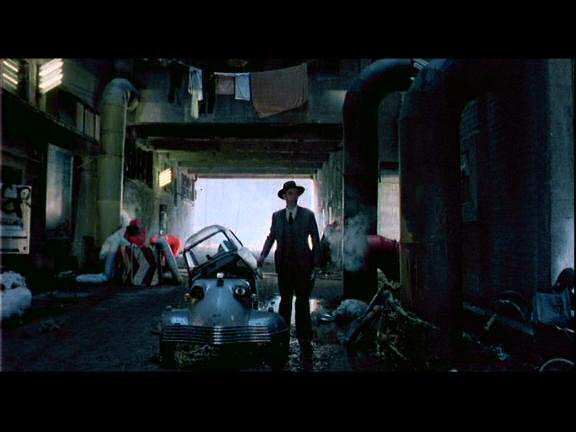 …until it is finally slammed to a halt as the bubble is re-sealed (with Sam on the outside). 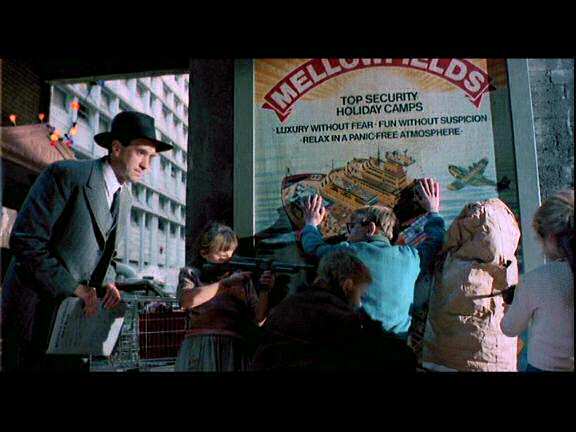 Look at that poster (one of many from this film) -it really wouldn’t look too out of place in most Western countries these days. 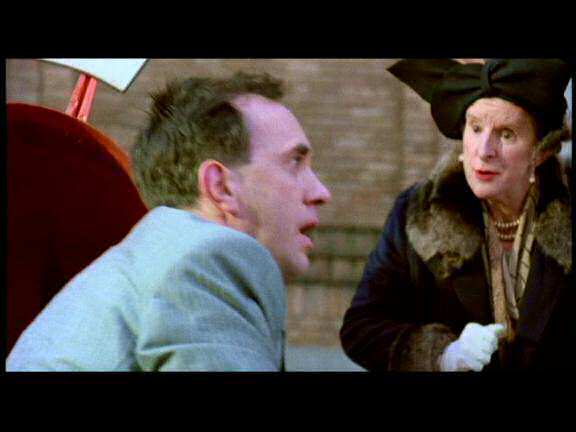 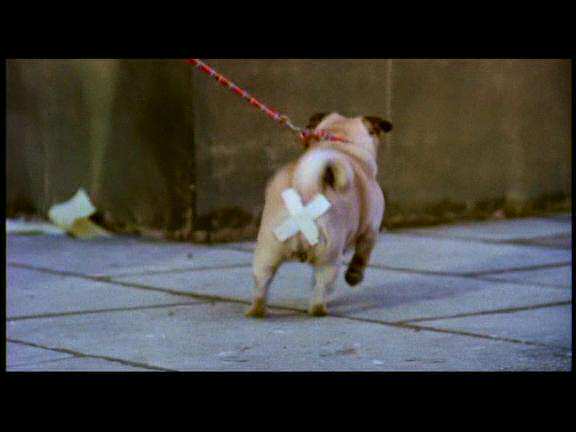 One way to avoid having to use a pooper-scooper .

It is only during the final credits that we are allowed bask in the land of Brazil -the music. The final rendition -“Bachianos Brazil Samba” is a Mardi Gras bells, squeaks & whistles affair that to my ears is also somehow disappointingly subdued, perhaps reflecting the melancholy aspect of the main character’s predicament and, by extension, our own.

.To me, Brazil -the movie, features an upbeat ending (and I’m not speaking here of the US “Love Conquers All” version) with regards the main character, but one that is not particularly flattering of the society in the movie nor of our own.

This is why the movie is called Brazil. It’s a longing by the main character to live in that other realm where life is not a scramble and a struggle amid corruption and grime, where people do not slavishly live in a non-thinking, tunnel-vision existence that pooh-poohs any suggestion of another life free of paperwork and ducts. Where the tune is never broken and where we can run free with little furry bunnies in a perfect Tellytubby la-la land… 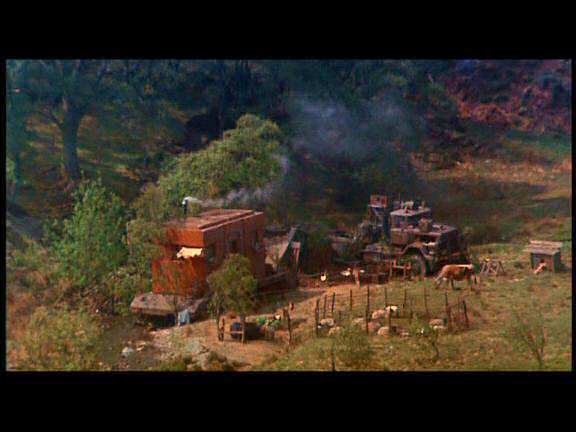 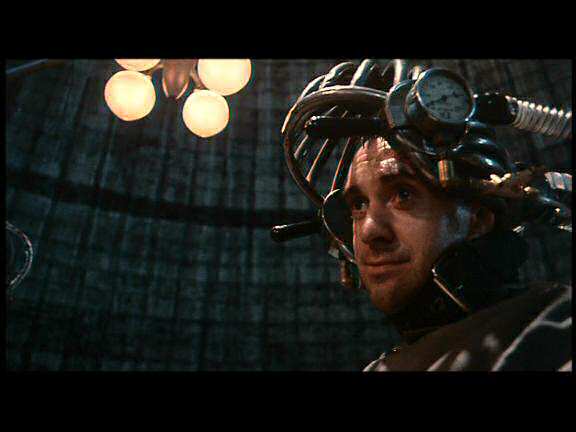 Now he is free. In Brazil.

…Now if you liked that, check out the hidden plots in Chitty Chitty Bang Bang

Or, What makes Barry Lyndon a Great Film?

Or, how about What is Looper all about then?

Or, Superman’s Underpants and the movie “Inception”

Or, The Umbrellas of Cherbourg -My Kind of Anti-War Movie

Or, why not take a look at some under-appreciated movie gems?

11 thoughts on “THEORY -Why the movie Brazil is called Brazil”