The movie Chitty Chitty Bang Bang contains many unanswered questions (and I am talking here of the movie itself with screenplay by Roald Dahl- not the vaguely-related book by Ian Fleming, nor the more recent stage show), namely

1. Why is the land of Vulgaria ruled over by a “Baron” of all things?

2. Why are children banished from the land?

3. Why is there a thinly-veiled sadomasochistic scene between the Baron and his wife where he tries to kill her while professing his love while she is prancing around in sexy lingerie?

4. Does she know he is trying to kill her and if so, why does she never acknowledge it? 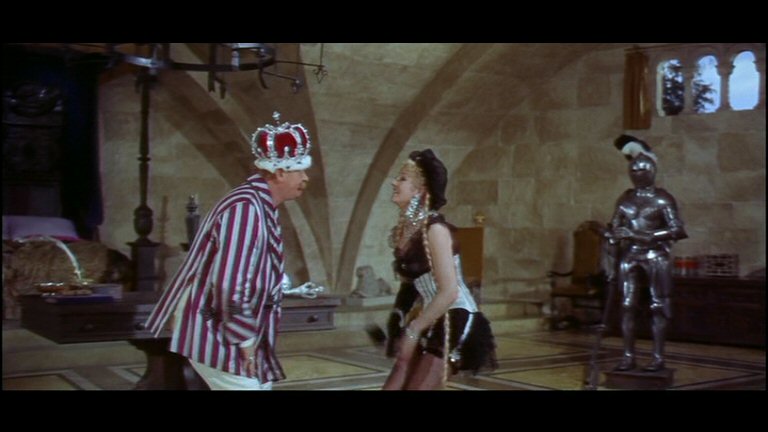 …The ruler of Vulgaria is king in all-but name. He lives in a large castle next to the town. His every whim is catered for. The all-powerful army do his bidding without question and his people and courtiers are all at his mercy. Yet the title of “Baron” is the lowest rank in the peerage system. It can not simply be a title of convenience for screenwriter Roald Dahl (there being no Baron in Ian Fleming’s book) and it is too obscure to be accidental.

So why is this title bestowed on such a man?
Surely it would make a lot more sense (in the context of writing the story) if he were a King or a Duke or even simply “Dictator”?

The reason for this is obvious once you think about it: Without children, the land has no offspring and so “barren”.

…But the land is in fact not barren, since we know that all the children (who haven’t been caught) are in hiding under the castle. 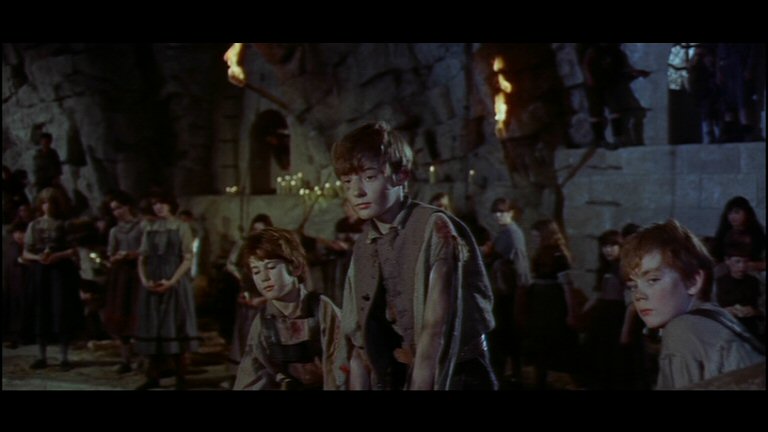 So why is this?

…Because the Baroness has banished them.

And why is this?

…Because (as her title dictates), The Baroness is barren.

Consider the pressure the younger, though aging baroness is under to produce an heir for her ruthless husband. If she allows this man to come into daily contact with children she would risk upsetting him and her very existence would be at the mercy of this childish ruler.

Also, why should mere peasants be allowed have something she and her husband cannot? 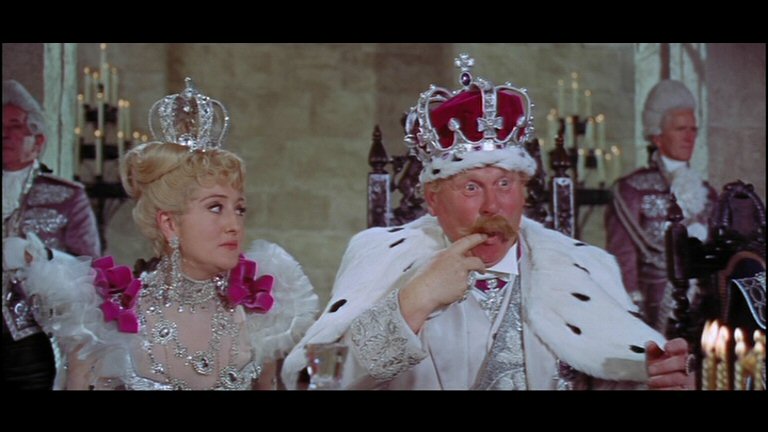 Is this not why the Baron is always trying to kill her? Why else would he be doing it? She obviously dotes on him, superficially at least the two are devoted to each other and she is quite beautiful (when not scowling).

He professes his love to her, but secretly wants her dead. Still she treats him like her own child and lavishes care & attention on him above all else. And why shouldn’t she? Her very future depends on pleasing him.

According to imdb.com, Gert Frobe (The Baron) was 23 years older than Anna Quayle (who played the Baroness).

It’s not outlandish to believe that the Baron married her after falling for her as “a bit of stuff”. Their relationship has always been about “play” (ie. ‘howsyerfather’). They are not capable of having a proper discussion about anything. They’re stuck in “cutesy speak”. As long as she can still make him happy “playing” he can’t broach anything of a serious matter with her.

So if he wants her dead, why not just have her executed?

Have you ever wanted to fight or argue with someone, but they just “wouldn’t let you”? …It’s hard to have that fight when the other person is saying nice things to you and making you dinner and playing with you (in a nice way) all the time. She is the queen of tarts… she got to where she is by using her “female charms”. She seduced the older, powerful man. Now she is stuck in that role but cannot “progress” it to the next level -ie. she cannot be “the mother of the heir”.

Hurting her feelings is more impossible for the Baron than killing her because they just cannot relate on that level. With her he has to be “ootchi cootchie”. She has to give him a reason to be angry with her, but she will not. She’s too good at it. 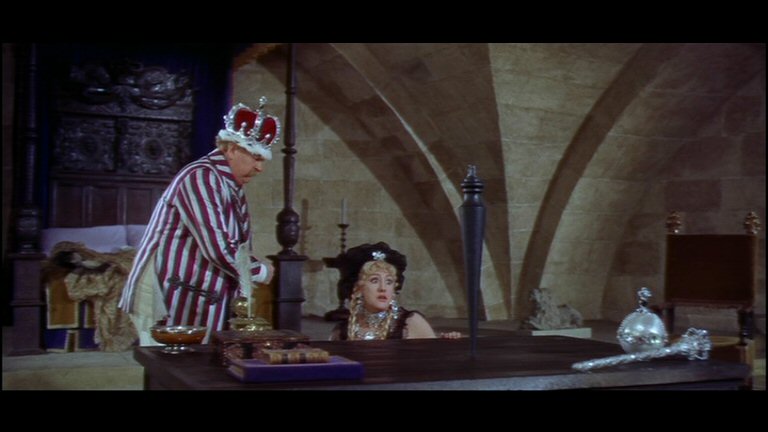 Yes she knows he is trying to kill her, but she can’t acknowledge it to him because that would give him the courage to admit it and to bring it out in the open. 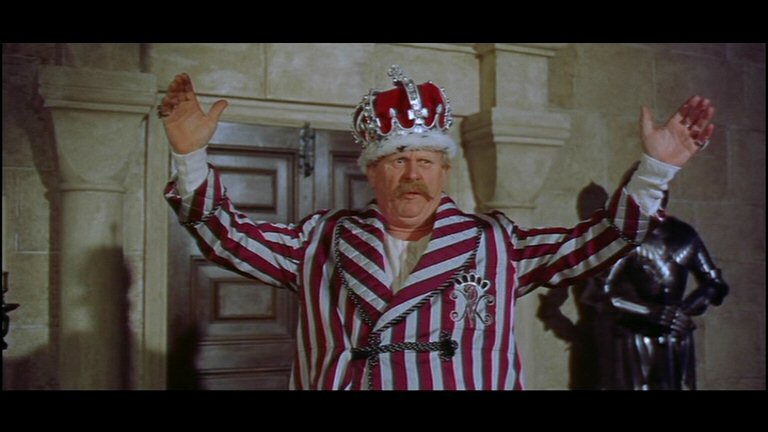 Of course the title suggests that the Baron himself is the “barren” one, but this is no matter. A man such as he would still blame her -secretly.

When the Baron grabs his gun to shoot his wife from the skies he exclaims “I’ve been waiting for this chance for 20 years!”. Still the Toymaker tells us the children have been in hiding under the castle only for the last 5 years. What changed after 15 years for the “ootchie-cootchie couple”? Is it not possible that the ever-more-desperate Baroness sensed her husband’s brooding for an heir and quickly banished all children to remove any thoughts of same from his mind?

When you look at it this way, the Baroness is certainly misguided and cruel, but also a pitiful victim.

The Baron, who heretofore may have been seen as the immature puppet of his spouse, is the clear villain even though his child-like black & white thought-processes might yet preclude us from imagining him as “pure evil”.

And what, then, of the Child Catcher? 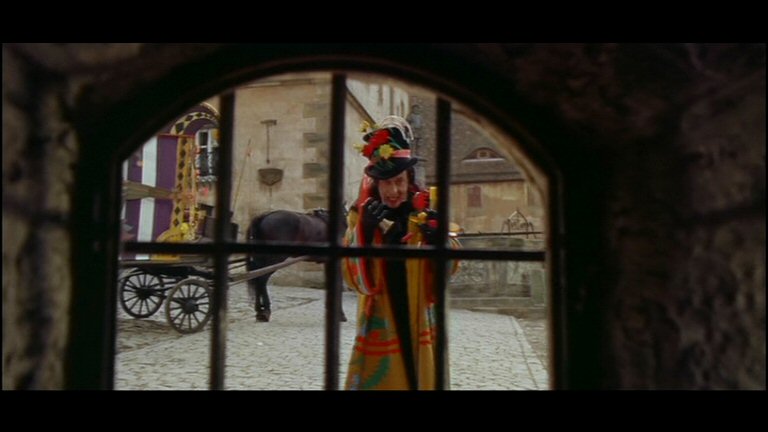 If there is a character of “pure evil” in the land of Vulgaria then it is surely The Child Catcher. But why is he instinctively hated and feared by every child (old and young) who watches Chitty Chitty Bang Bang? Is it simply because he catches children in his net and hauls them off to the tower? This is certainly part of it, but still there is something else to this character… Something clearly… evil…

The Baron and Baroness are self-centred, spoilt characters, but both are themselves (in separate ways) victims of circumstance. Only the Child-Catcher does what he does by choice-or for special reward. But so too, only the Child-catcher clearly enjoys his position in life and extracts clear satisfaction from the role.

Why does he wear a traditional undertaker’s outfit?

This outfit implies without stating that the child catcher kills the children he locks up. Even if you haven’t previously considered such a thing or find it distasteful to mention, to see an undertaker hop and skip and prance about is to know the man revels in death –and in this case, the death of infants. Children watching this movie know it at once. This is no mere lawman. He is the devil himself.

Distasteful as it may be to further infer (though remember the land is called Vulgaria), I suggest the large hook and net that are the tools of his trade are symbols of the utterly unspeakable, evil methods he must have employed in dealing with “new” babies in the past five years, for surely he must have had a lot of success in his role if his position is still held and feared by all.

Vulgaria and the Baron were carefully named.