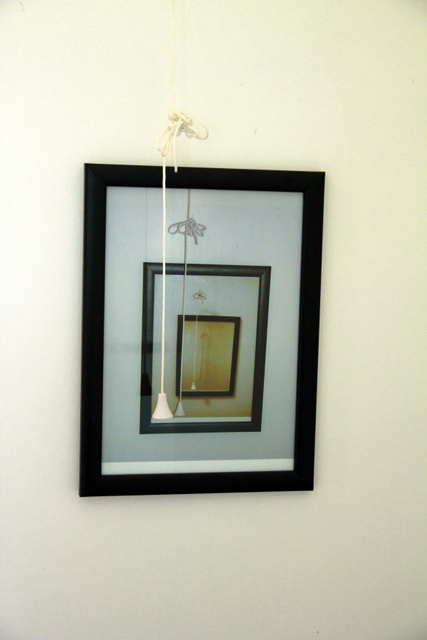 Now, sorry for showing you my bathroom wall, but there’s more to it.

It’s not easy to explain, but once this photo is put in the frame and placed in that location, behind that piece of string, it then takes on a whole new depth that you can’t see in this photo.

When Mrs. Rumm saw it she shrugged and sighed and smiled and walked away. Nothing new there then.

As my (then) 8 year old daughter immediately explained when she first saw it “the first picture is outside!”

…When we look at this picture in this place we are standing in the outside layer of the image. It’s quite beautiful. 🙂

Anyway, I posted that pic to illustrate my other point, which is to do with the movie INCEPTION, directed by Christopher Nolan. If you haven’t seen it, look away now because what I’m about to discuss could be seen as a possible spoiler in a way…

Is it a coincidence that the “kicker” used to wake people out of their dreams, in Inception, is Edith Piaf singing “Je Ne Regrette Rien”, as played most recently by… Marion Cotillard (who plays Leonardo’s wife in Inception)?

Whilst I don’t really think it matters if “it was all a dream” or not, I believe there are a number of pointers that suggest, yes, Leo is still (and always has been) in his dream world, but perhaps now he has been “impregnated” with the inception of a notion that perhaps it is just that -so one day he will follow the route Ms. Cotillard has taken before him. ?

Whenever we, the film-savvy audience hear that song in Inception we are most-effectively pulled out of the clearly-defined undreamlike dream-unreality “action movie” to see the layer above the layer (ie. “this is a movie -and she was in another one, singing this very song not too long ago” -she is calling Leo & the viewer from “another place entirely” -outside the dream/ outside the frame.)

In my view, Nolan deliberately uses this, as opposed to any other song, to do just that. It breaks the fourth wall. It’s 3D, without the glasses.

What’s that? You want more proof about all this?

Ariadne was the daughter of King Minos, who helped Theseus out of the Labyrinth.

To me, Ariadne in Inception (Ellen Page) is playing this same role. Her character is clearly challenging Cobb at times, almost willing him to come to certain conclusions. She lets him believe he is teaching her, but clearly she is the one teaching him a thing or two (I’m sure there’s some significance in her selection of a pawn as a ‘totem’ and allowing Cobb to examine it too, but haven’t discovered that yet).

In my mind, Mal (Cotillard) and her father have set up this over-complex plot to create an inception in Cobb that maybe, yes -he is dreaming. In fact, I believe Mal (daughter of Miles) is none other than Ariadne -daughter of Minos/ Miles, who has built this labyrinth in the first place -or had it built.

Ariadne, Fischer, and all the others (if they are not themselves part of the ‘dream’) are part of Mal/ Miles’ team, not Cobb’s.

This would explain why Ariadne gave away the secret of the ‘air ducts’ to Cobb towards the end. She was the architect and was not supposed to tell Cobb anything lest his ‘subconscious Mal’ scupper the whole plan, which led him to confront his wife once and for all rather than run away.

This was the key to the labyrinthine inception-insemination -not the thing with Cillian Murphy. That (and everything else) was the distraction for Cobb to possibly arrive at the original idea that …”maybe this is all a dream afterall” at some point after he wakes up.

I believe, perhaps, this was the plotline all along, but had to be made more ambiguous (and better) because otherwise it could and would be interpretted as urging Leo’s character to commit suicide.
That would just leave a nasty aftertaste.

Thanks to “Joseph”, who commented on Jim Emerson’s excellent blog, pointing out the part where Ariadne breaks the “rules of architecture”, seemingly pointlessly. Before that, I didn’t realise what her name was.

I must say I enjoyed the movie quite a bit. It does involve what I refer to as a Superman’s Underpants obstacle, but if it’s possible to overlook and/or accept the stoopidness of certain situations/ scenarios/ exposition, then I believe there’s a top-level action adventure to be enjoyed here.

It is possible to discuss what else is good (or not so good even!) about the movie, but I’ll just say this.. just because it “fails” to present dreams in a way we normally view them in “reality” or in movies doesn’t mean it was trying to do that in the first place.

Superman the Movie (1978)
If you can get over the sight of a man wearing red underwear on top of a cat-suit with a cape, then the actual movie being presented to you, you will find, is quite good -and nothing to do with the underpants.

Almost anything by Powell/ Pressburger.
Black Narcissus is a ridiculous film, full of silly people and a convent on an impossible cliff. If you can get over the ridiculous “rules” of this world, then like many people, you may hail it as a masterpiece.
I prefer The Red Shoes -again, the Superman’s Underpants obstacle here is “Ballet”. Like, who wants to see a movie about ballet?

The Wire
Street crime/ life in the ghetto/ no central ‘focus’… I could do without that. Maybe you could, but that’s not what this is about.

In This World
You say you don’t fancy sitting through a preachy movie about poor people having it bad? Well then, watch the thriller, In This World instead. No really.