Rest assured, there are no plot spoilers in the following images or the review.

Being in the right frame of mind of a wet and windy Sunday afternoon I decided to rewatch A Very Long Engagement recently. This was possibly my fifth viewing and it still didn’t fail to move, entertain, puzzle and amuse me from start to end. 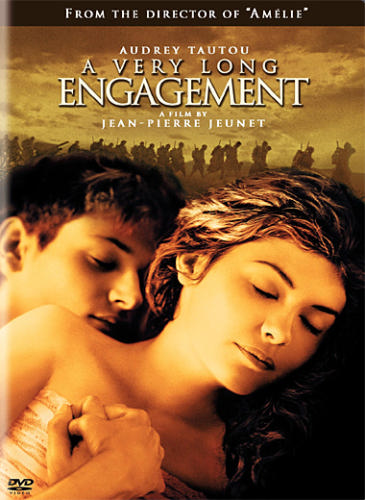 It’s the tale of a young woman who refuses to believe her betrothed has died in the trenches in WWI. 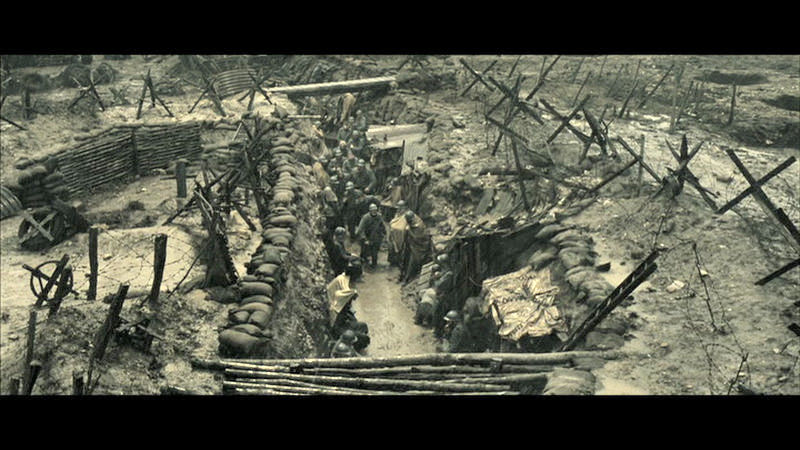 I’m one of the few (it seems) who didn’t much care for Amelie, but I did really like the look of it.

Here Audrey Tatou reteamed with director Jean-Pierre Juenet in what I consider an infinitely better movie. It is based on an excellent book of the same name by French author Sebastian Japrisot, so that helps. 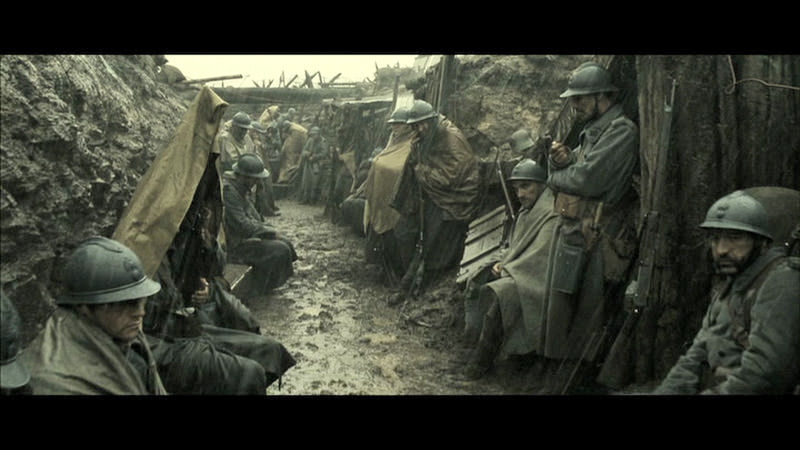 OK, it’s somewhat confusing -for one thing everyone looks similar in the muck and hair-filled trenches. And the people and names come so quickly the viewer is soon bombarded from all angles with faces and strange events, sad circumstances and downright hilarious situations. Possibly not all of it makes sense straight away and no doubt we all miss lots of it in the thick & confusion of it, but I guess such is the chaos of war. 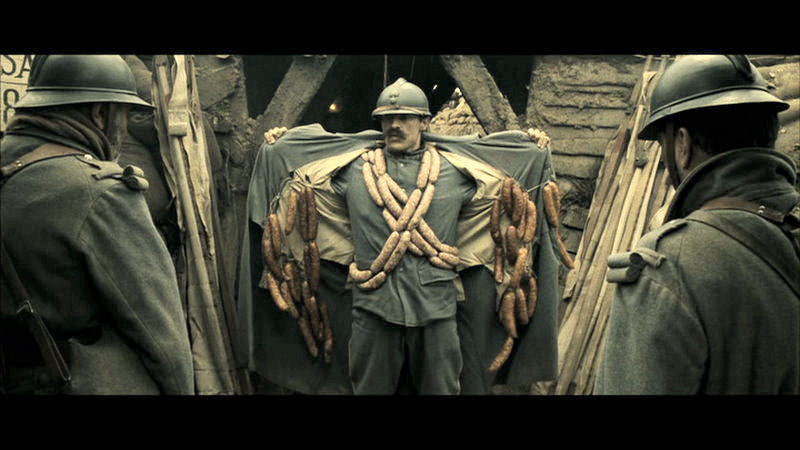 No doubt this confusing “mess” lead to its apparently being ignored outside France, but understanding it all at all times is not at all necessary for the delivery of the beautiful kick it gives the viewer -every time.

It’s a lovely lovely story that deserves a wider audience. 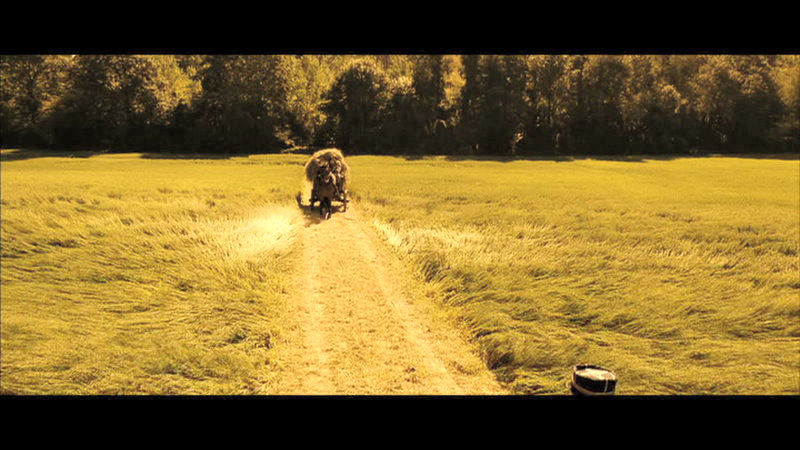 This movie has a romantic nostalgia-laden deep dark sepia tone (lessened somewhat here in order to make them a little more vibrant in still form) -similar but a little more ‘filmic’ I believe to what the Coens achieved in O Brother Where Art Thou. 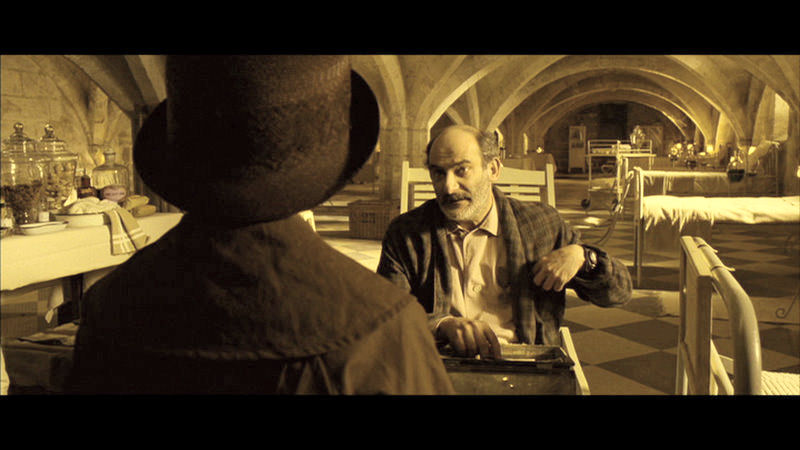 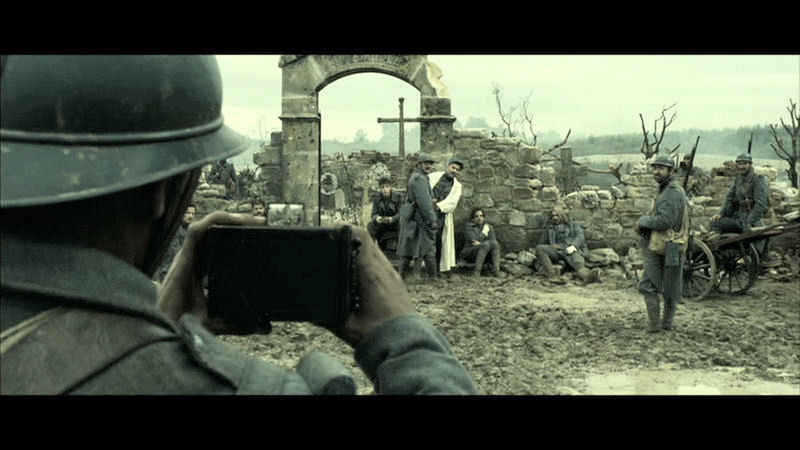 Take a look at the detail in this thriving market as the camera zooms downwards. Few movies nowadays can handle such large crowd scenes so well and also not lose sight of the more “intimate humanity” sections that tie it all together. 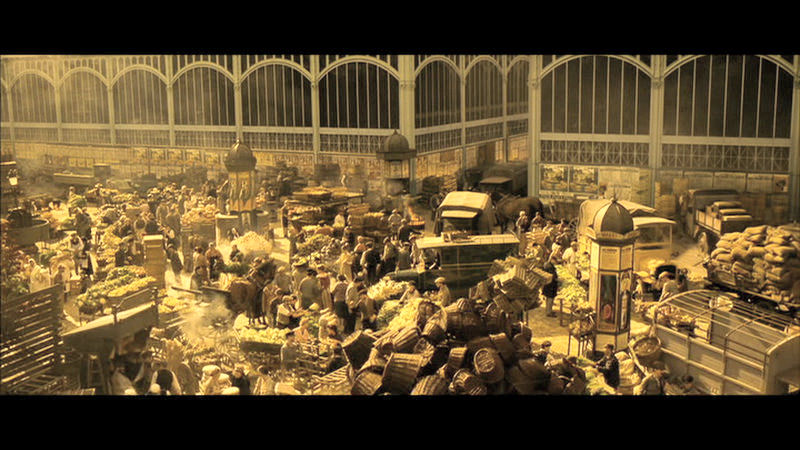 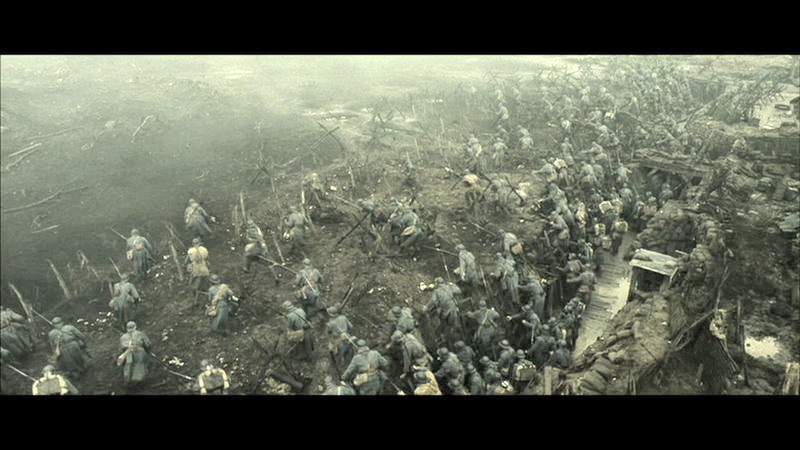 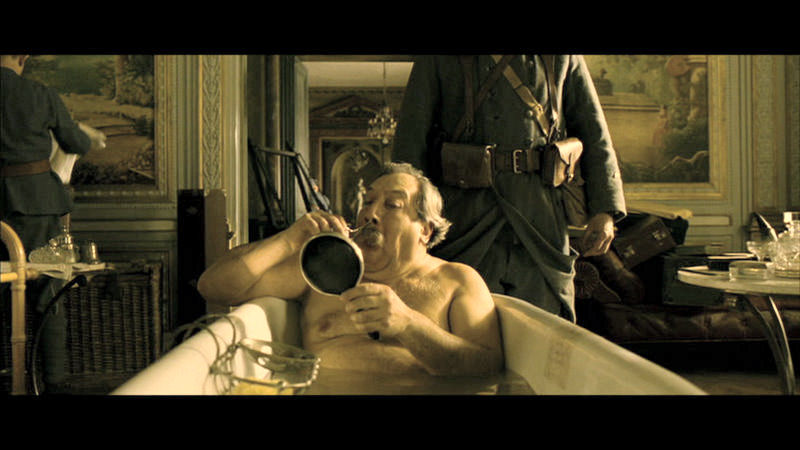 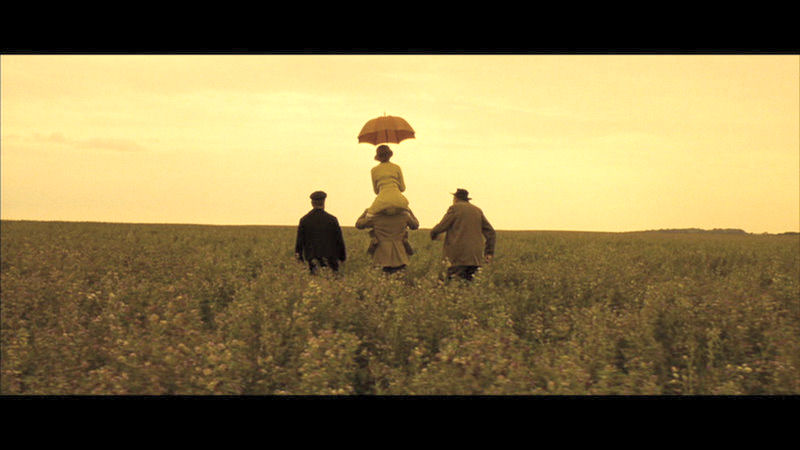 Marion Cotillard plays a small but integral part. (The digital distortion in this image is down to the brightness I added, believe me without which you wouldn’t see much -possibly a tad over done here though -sorry.) 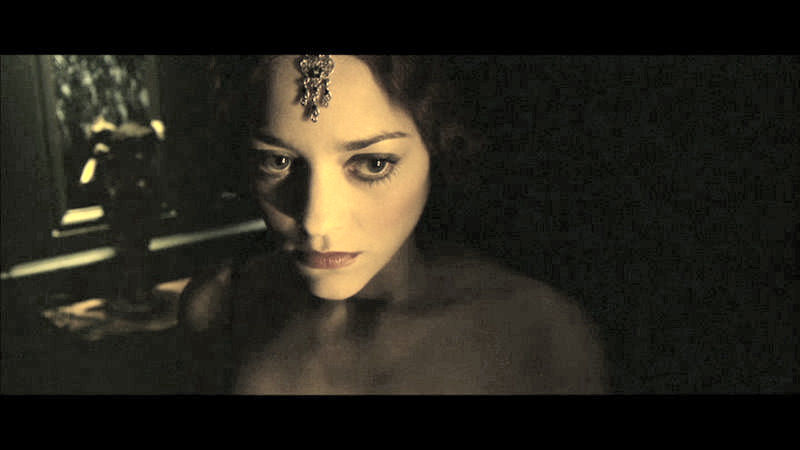 Even as I selected and freezed this next shot I realised how perfectly-framed it is. Just because this is a complex, harrowing (and hilarious) story doesn’t mean it doesn’t have to look great as well -and it does! 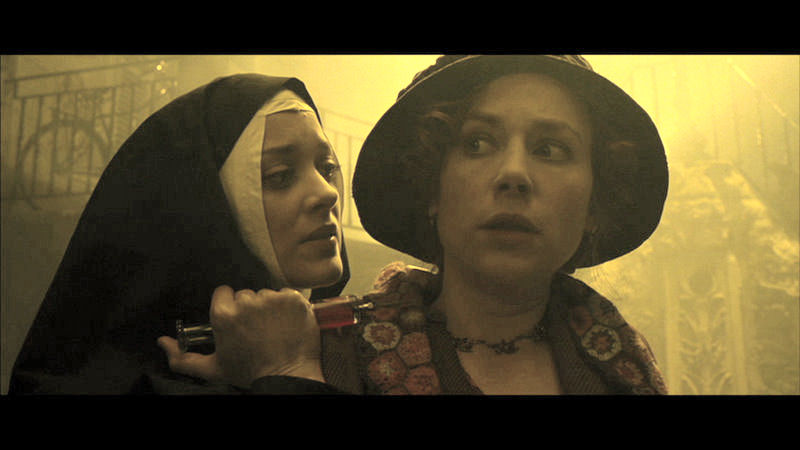 See! Below we have more examples of this “Epic to Imtimate” quality in which this movie excels… 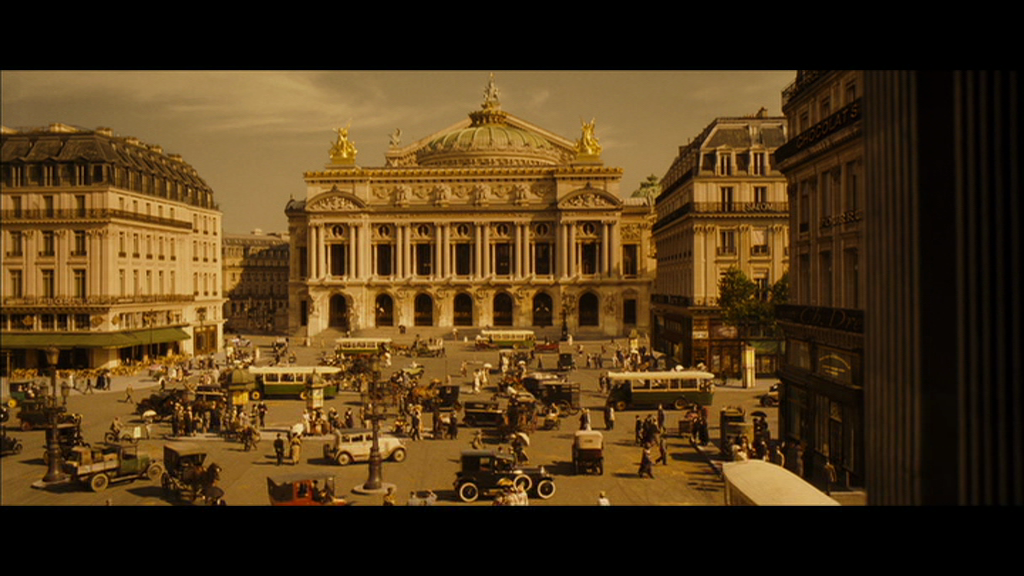 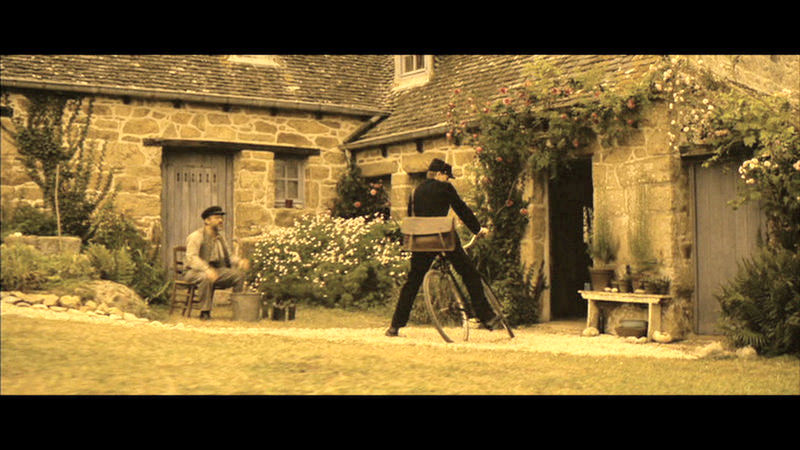 Anyway, getting back to Ms. Cotillard, there is a part where she announces “Je ne regrette rien”.. 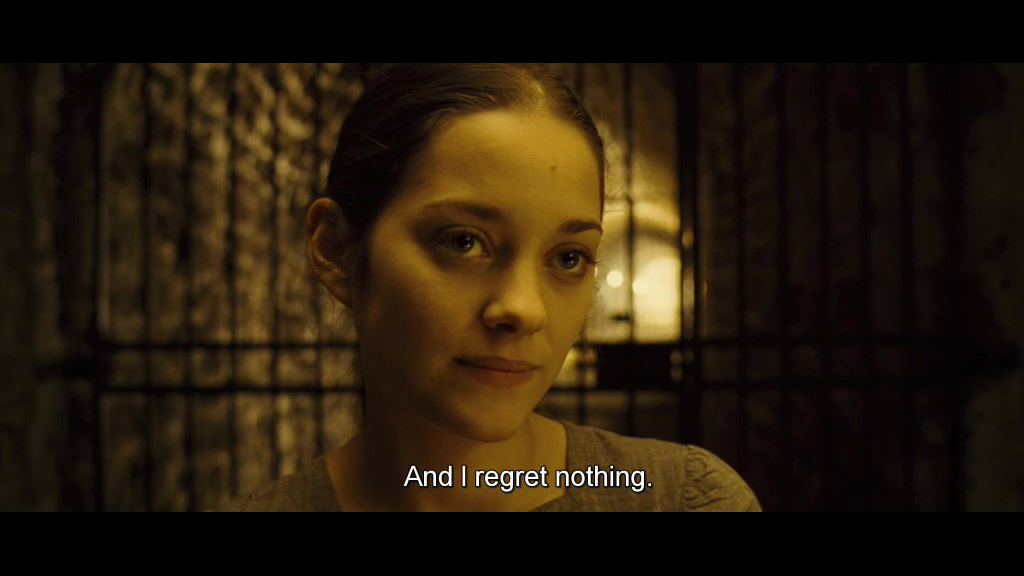 A couple of years after this movie was made, she starred in a movie called La Vie en Rose (at least it was called that here, maybe something different in your neck of the woods).
Being a biography of Edith Piaf, the song Je Ne Regrette Rien (‘No Regrets’) features highly in that movie.

A couple of years after that, Marion appeared in another movie called Inception, in which this very song is once again used as a reminder to the protagonist/ audience exactly who is waiting for them outside the world of dream.

… see here for more on that. 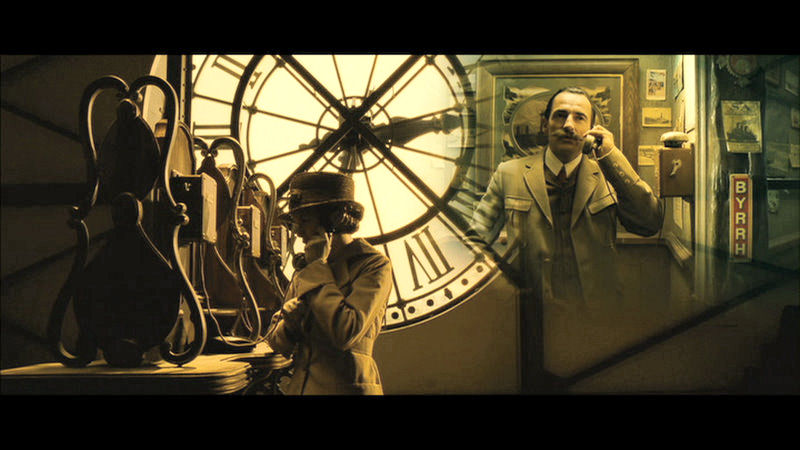 For all its tricks-in-the-bag, the film never feels “over-directed”. Scenes are quickly and neatly stitched together, but the slow moving camera throughout manages to calmly massage and soothe our aching brain (aching from trying to remember who did what and how one person said something or other back when)… 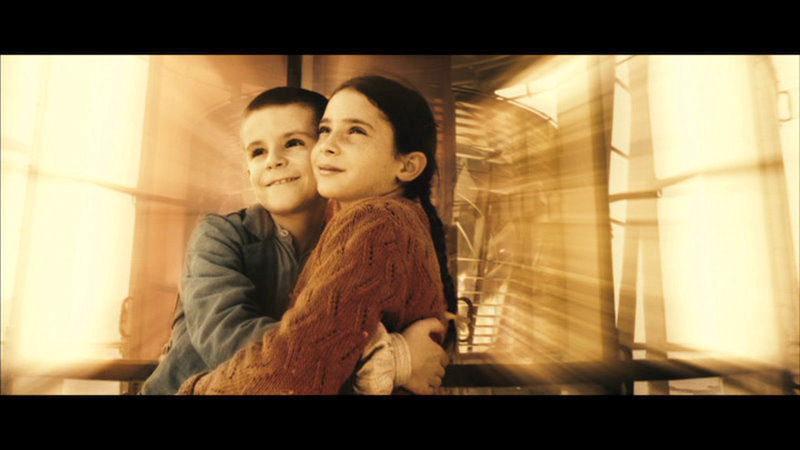 …But that too is part of the plot -the viewer’s senses are being continually bombarded, like soldiers in the trenches with barely a let-up. Juenet’s quirky and humorous touches are not only a welcome distraction from the horrors that we see, but also serve to disorient the viewer and leave them feeling dizzy and somewhat imbalanced… which makes the more intimate/ more staid scenes all the more moving for their respite. 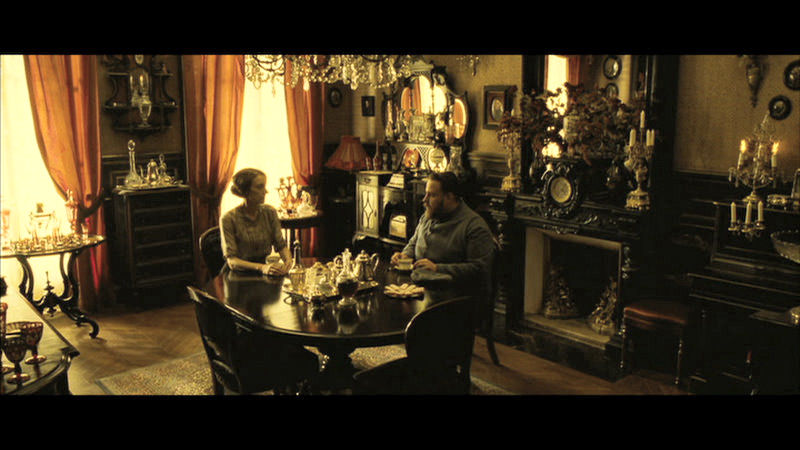 To my mind, there is one thing that I don’t like in this film: the gratuitous sex scenes.

I mean, I’m all for nakedness –and you don’t see naked bodies here anyway– but you do see arse-closeups aplenty as thrustings and sweaty entanglements ensue. Apart from this it’d be a great film to show youngsters to get them interested in watching subtitled movies, but because of this it’s unsuitable for them, I feel.

Besides that, who really wants to watch two people make a big show of licking each others noses before sinking their tongues down each other’s throats? I don’t.

Who really wants to see Jodie Foster’s feet wrapped around a naked backside as it pounds and pounds? I don’t. (Did I mention Ms. Foster plays a little part? I don’t speak fluent French myself, but she seems to play it well from what I could tell -although her character is a French-speaking Polish lady, which would likely excuse any accents I don’t notice).

I believe these scenes hold the otherwise damn-near-perfect film back a little. Not enough to spoil it by any means, but I’d personally prefer if they weren’t in there.

So in conclusion, it’s a kind of “coming to grips with a massively-upheaving, life-reorienting trauma” type of romantic uplifting epic and confusing story that you can rewatch forever. And I love it. 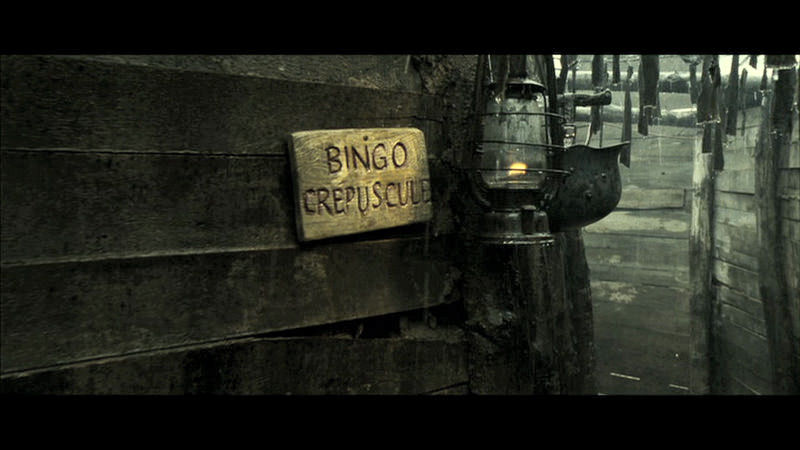 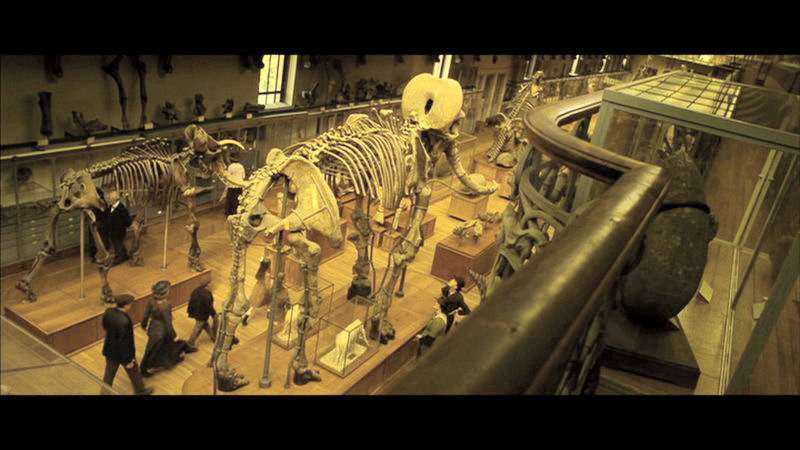 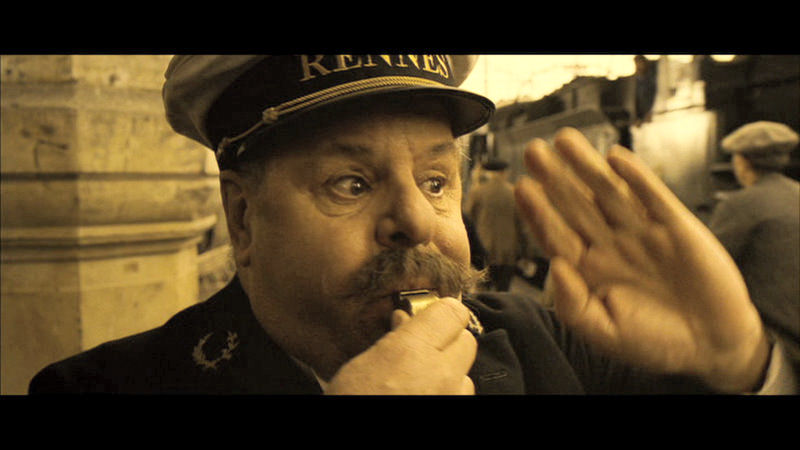 These images alone (which I captured a couple of weeks ago) are making me want to watch it again. There are many others I could have posted here.

Here’s one last one… 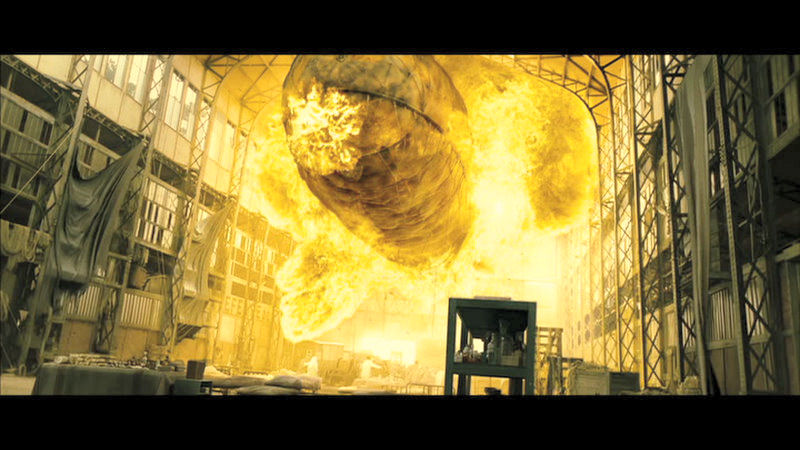 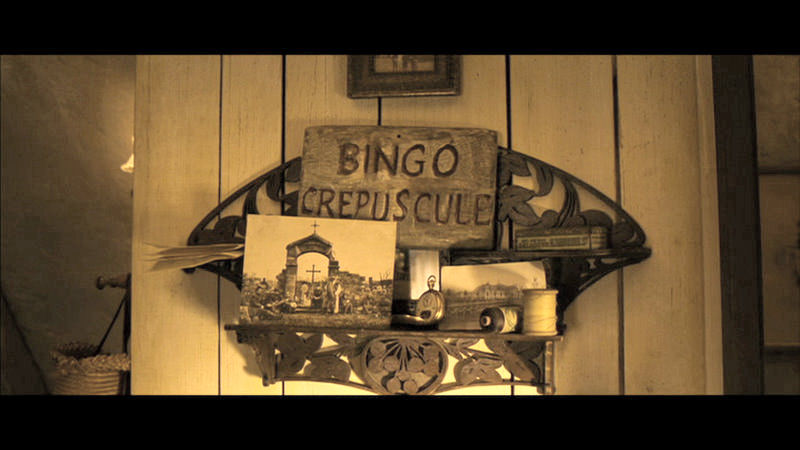 They simply don’t make them like this anymore. Not since 2004 anyway.

And I can heartily recommend the book as well. Jean-Pierre Juenet is not responsible for all the quirkiness in this movie -a good deal of it is also in the source material, by the excellent writer Sebastien Japrisot.

…As you rewatch this film -the more you rewatch it- the more you will spot in seemingly every little cut-scene.
Look at this still frame, for instance from very early-on… 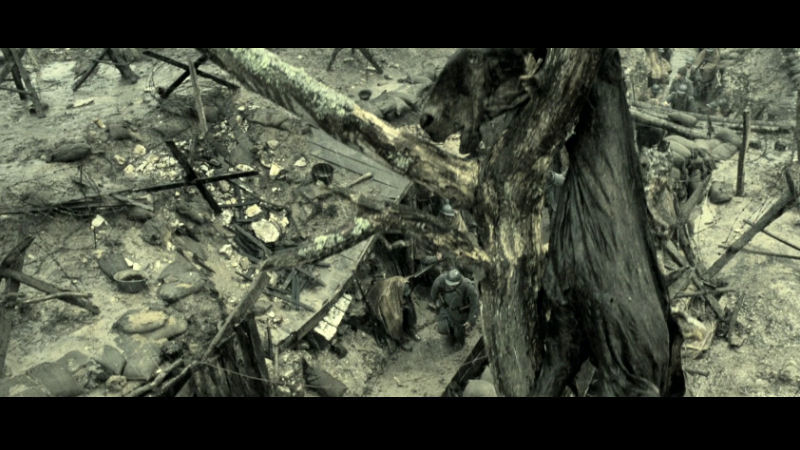 …it seems more gruesome here than in the film. In fact the dead horse hanging from the tree in the foreground is easily missed -I didn’t spot it until very recently. Why is there a dead wet horse in a tree? How did he possibly get there? How much trouble did the film-makers go to in order to place it there for a shot where most people wouldn’t even spot it anyway?

I hope this last image doesn’t put you off seeing it. It’s not a real horse you know! There are no other scenes of animal mistreatment in there to my knowledge -and as I say …you probably wouldn’t have spotted this in one viewing anyway. I only mention it as a graphic illustration of what else there is to see in this movie with repeated viewings.

Now, you could do worse than check out my theory on Chitty Chitty Bang Bang (and more-indepth view of it thereafter).

Or perhaps you always wondered Why the movie Brazil is called Brazil but were afraid to ask?