Certain artists -artistes if you will- invite you into their world, to see your own world through their eyes. For many viewers/ listeners/ readers/ participants this can often come across as incomprehensible nonsense. For others more-attuned to the wavelength of the originator perhaps, it can immediately be recognised as a breakthrough, speaking directly to the heart of what they’ve always felt but could never hope to express -or if not that, immediately appreciated as an expression of truth -or even a new kind of truth.

The rest of us can wander around as if in a daze afterwards, unable to comprehend what we have witnessed, often experiencing an incomprehensible anger or contempt towards what has been put before us, such is the level of mistake or seemingly wrongness to it all.

People often attribute a certain intellegence-level to the appreciation -or lack of appreciation- of such art (and it works both ways, with cries of elitism or braindead-ism for its enjoyment or otherwise.) Perhaps it is a branch of intelligence, but to my thinking it has nothing to do with the Comprehension we usually mean by intelligence. In fact I believe it is often the opposite of this: it’s to do with the willingness to traverse comprehension.

None of this is to suggest I’m always to the fore in recognising/ enjoying/ appreciating such an ‘auteur’. There are many such ‘creators’ in different fields whom I readily admit must have something but which I can never (thus far) grasp. eg. Thomas Pynchon, Jean Renoir, Tom Waits, James Joyce, most ‘modern art’ artists, etc..

Immediately I’m a philistine to fans and officianados of these people, I know. I don’t mean to cast aspersions on such maestros’ work, but rather shine a light on their commitment to the craft -their vision -their outlook on life. I salute such singular approach to “Art” in all forms, whether I “get it” or not.

This to me is what Art is. A true artist is one who knows (no doubt) the rules and has heard all the arguments for how things are supposed to be done. He/ She is aware of every reason why something doesn’t work, but yet spots or senses something new, something unconsidered, something overlooked and brings it to the fore.

Sadly, more and more it seems, the world is full of so-called writers/ directors/ painters/ musicians who first look outwards at “what the audience/ publisher/ agent wants” rather than inwards at “What do I know? What do I feel? How do I see the world? What can I bring to the table?”

To my way of thinking, this is the difference between an Artiste (whether I can personally appreciate them or not) and a whore. Mostly the world of cinema/ books/ ‘art’ consists of whores.

Happiness is a 1998 film by Todd Solondz. 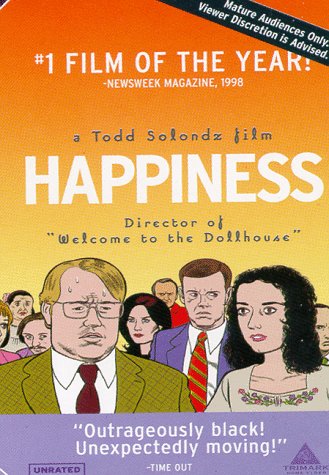 The first time I saw it (around the time of its release on Region 1 DVD) I must confess I was appalled. The film, with its depiction of some seriously dysfunctional individuals in a seemingly-comic setting jarred me so much I felt contempt for everyone involved. “How could these people even agree to act in such a movie?” was my genuine first thought. I couldn’t believe, for one thing, someone had made a film wherein (among other things) a paedophile was portrayed sympathetically. A sickened anger arose in me long before the credits spurted onto the screen. I even felt anger towards my wife who afterwards conveyed no such contempt for what we had witnessed. How could she have so much as tolerated this travesty?

For a long time after (hours? days? weeks?) I was Alex from A Clockwork Orange following his aversion-therapy. Whenever I thought of that film I felt ill. Seriously.

Then a strange thing happened some six months later: I happened across a forum where people were expressing an appreciation of “that film”. As I read, I began to be reminded of scenes that “weren’t too bad”. Once or twice I tittered despite myself.

Yet it was some three months after this again when I finally found the courage -or the will- to rewatch Happiness. My reaction was a complete reversal -I laughed and loved it all the way through.

Since then I have watched Happiness at least seven times and each time it gets better and better. I now count it as one of my favourite movies of all time. I do find it too long but there is nothing in it I would or could think of that should be cut.

Although I sympathise with the view that it is a sick movie, I look back on the person I was when I first experienced it (in 1999 or so?) and feel nothing but an almost embarrassment for my reaction.

The movie was the same, so what changed?

The obvious answer is “me”, but it’s not just that. Of course on my second viewing I was forearmed with the knowledge of what was -and was not- going to happen. I was no longer viewing it, imagining where it was going, but now I could actually look at where it was going and perhaps experience that for the first time rather than watching in fear of what would come next (no pun intended).

Certainly though, the main thing to have changed in that 9-month or so period from first viewing to second was me. This movie I believe showed me how a movie should be (in my view).

It’s not the first or the last film to do such a thing of course (not even from this director) but for some reason it took me many months after viewing Happiness to realise that almost every film out there virtually insists I ‘like’ the protagonist(s) and plays to my prejudices and preferences in order to gain my affection.

Happiness almost does the opposite. It’s a film whose characters are surely disliked by everybody, yet dares the viewer to look past this to see the bigger picture.

Post-Happiness, I think perhaps I’ve learnt to be more guarded with my affections towards onscreen characters. I don’t submit to them freely -and I find myself separating emotion from the rest of the ‘package’ that makes up a film.

It’s likely this film wasn’t solely responsible for my ‘movie-viewing transformation’. For instance I’ve always found myself favourably disposed towards the films of Stanley Kubrick, who is often (wrongly) said to ‘lack emotion’. What Kubrick -and the movie Happiness among others- does is to lay the plans out at one’s feet and allow the audience -the viewer- to decide how to react/ how to see it.

Don’t get me wrong -spending 90 minutes being spoonfed emotion-on-rails via manipulative characters/ visuals/ audio can be enjoyable too. Who’d like to live on nothing but steak after all? That can be as debilitating as the guy who spends a lifetime slurping beans with a spoon.

It’s not an either/or choice, but I would dearly love if the phrase “leave the brain at the door and enjoy” was more readily recognised for the braindead remark it truly is.

By all means enjoy the chicken nuggets and the sausages and the beans and the sugary candy, but don’t mistake it for a slap-up all-round honest-to-goodness healthy meal.

Anyway, after fourteen years or so I thought it important to throw a few thoughts together on the subject and to mention that I believe Happiness is a truly excellent film that deserves widescale recognition and acclaim.