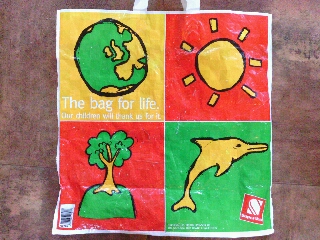 It was introduced by Super Valu supermarkets (in Ireland) prior to the introduction of the Plastic Bag levy in 2002.

During the build-up to the new tax everybody complained. It would never work and it would drive people away from the shops, businesses argued.

Convinced that footfall would suffer, Super Valu (and possibly a few others) decided to get one up on the competition by adopting this “Bag For Life” policy. 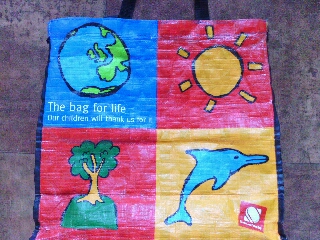 The idea was that if & when the bag broke or deteriorated they would replace it -free of charge. For life.

…At least this is my recollection of it.

I asked if this was correct in my local Super Valu recently. The staff member looked at me for a moment, counting my heads it seemed, before bursting out in tears of laughter. She had never heard the likes of it in the past nine years (since the levy) but it did ring a bell with her and she’d be interested to hear if it was true herself.

We discussed it for a while and she admitted to me she had lots of these bags at home and she’d love to replace them with new ones.  Looking left and right she tried to find a manager for me to talk to, but there were none available. Meanwhile a queue had built up behind me and it was the only til open (being early in the morning). She asked if I did want a replacement bag. I said no -but I am curious about it. I know Mrs. Rumm threw some out a few years back and I’d like to know if she deserves my eternal scorn for doing so.

The staff member offered to go find the manager but I told her to leave it -“I’ll be back,” I assured her, “we’ll do it then.”

My question is, AM I WRONG?

I searched online and so far the only thing I can find to suggest I’m right is this page from The Fingal Independent in 2000.

In case that link goes dead at any time, here’s the relevant paragraph:

Manager Shea Smith is planning a one-week promotion to give away the ‘Bag for Life’, which will normally cost 10p.

A very nominal sum given the supermarket’s promise to replace it free of charge if even after bearing the weight of many kilos of comestibles it tears or breaks.

…Or maybe The Bag for Life (“Our Children will thank us for it”) means something else?